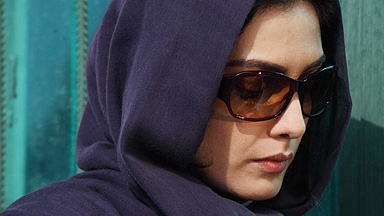 In 2010, malady Mohammad Rasoulof, see along with the fellow Iranian auteur Jafar Panahi, was arrested on charges of collusion against the Iranian government. He is currently under house arrest.

Goodbye,” the“ last film he made before his arrest, is an intimate but cold sort of modern tragedy.

It’s the story of Noura, a beautiful, young female lawyer, who is barred from practicing law. Her dissident husband is in hiding from the government. She is completely alone in her society, unable to visit doctors, check into hotels, or pick up passports without the accompaniment of her husband. Her ability to argue for her situation in society falls upon deaf ears and she grows impatient. She feels like her only option is to flee the country, a dangerous and difficult task.

“Goodbye” crawls on at a reluctant pace, inducing subtle dread. There is no warmth in the camera lens, there is only a muted, claustrophobic view of Noura’s life and struggle. As this cold intimacy drags on, fear builds and an otherworldly sense of violence lingers in the background. It is not a visceral, physical violence, but the slow grinding of existential terror.

As she grows impatient with the process of escape, Noura becomes cold as she loses faith in the ability to hold on to her husband and at some points, potentially her unborn child. Rasoulof ’s vision points out the shallowness of “Hollywoodized” suspense. Fear doesn’t only exist in the fight or flight moments of escape and action- there is another kind of a fear, a more real one, that lurks in the moments of everyday life.

Her tragic interactions with society are only one part of her struggle. The time she spends building boxes in which the pain of not knowing sink in. The film doesn’t ask for for sympathy- it shows us life as it is, for better or for worse, for a woman in Iran. I find it strange to imagine this film, showing in theaters across the world without the director to speak after it.

It’s difficult to remove “Goodbye” from the social context of the director’s condition, but that’s the state of Iranian cinema. While the film moves at a slow pace, the complete context is a sense of urgency. There are things that need to be done for the filmmakers and the people of Iran, and it’s important that these films be screened.
— JOSEPH WOZNY