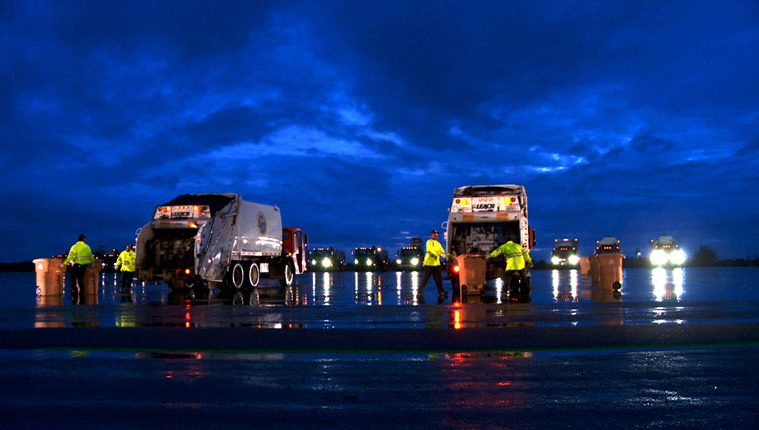 Scene from the performance of Allison Orr’s The Trash Project.
Photo Courtesy of Trash Dance.

Another Houston Cinema Arts Festival (HCAF) has come and gone, which for me meant another five days in the dark. As with all festivals, you see a lot and you miss a lot. Three things stood out for me: Andrew Garrison’s charming Trash Dance, Phil Solomon’s epic American Falls and the experimental film programs on Shirley Clark, J.J. Murphy and others.

“There’s a grace to what we do,” says Don Anderson, in Garrison’s moving film, Trash Dance, which chronicles Austin dance maverick Allison Orr’s lead up to The Trash Project, a dance for sanitation workers and their trucks.

From the first frames of Garrison’s film, that grace is evident. Everything in Trash Dance speaks to the dignity of work. There’s also a grace to the way that Orr goes about making this dance, or rather convincing the sanitation workers to join in the effort and eventual performance, which went on to be named the #1 Arts Event of 2009 by The Austin American Statesman and the #1 Dance Event of 2009 by The Austin Chronicle.

Garrison captures the anxiety of doing something seemingly impossible, of Orr’s self-doubt and the gradual getting-with-the-program that happens among the sanitation workers. Shot on a stormy night, the bright orange of the trucks framed against a deep gray-blue sky against a watery, reflective road, the cinematography of actual performance of The Trash Project is nothing short of revelatory. Anderson’s crane ballet sweeps across the frame with a miraculous dexterity. This is the kind of film that, when the credits roll, you already miss.

Solomon’s American Falls might stop any viewer in their tracks: its beckoning gravitas lures one to stay and watch all 51 minutes.  American Falls‘ triptych structure, inspired by Frederick Church’s famous painting, juxtaposes iconic scenes from American history. Anyone can recognize scenes from Charlie Chaplin’s films, King Kong, the Moon landing, Eisenhower, FDR and other significant events that are etched on any baby boomer’s memory. But the guessing game fades as the cumulative power of the images takes over, and we realize we are watching the decay of the American mythos.

A torrent of images crashes through the 20th century, as Solomon hacks our collective amnesia using an alchemical process of celluloid erosion. History appears to be melting, deconstructing, fading; we see its cellular dissolve. The results are painterly, stunning, symphonic and in the final throes, patriotic. At a Meet the Makers panel, Solomon called the piece “a lamentation for America and for cinema.” American Falls concludes with a cathartic unison of Niagara Falls, considered one of the great wonders of the world. Relentless in its power, American Falls is surely a wonder of the film world. Originally commissioned by the Corcoran Gallery of Art in Washington D.C., American Falls is on view at The Museum of the Moving Image in New York City through November 25.

I came into this festival knowing next to nothing about experimental film, and emerged knowing something, thanks to all the informative programing at Cinema 16, including Where’s Shirley, Meet the Makers with the Cinema on the Verge artists, Remains to be Seen: The Films of Phil Solomon and The 16mm Films of J. J. Murphy.

Dennis Doros and Amy Heller’s wild goose chase to restore a Portrait of Jason is a compelling adventure in and of itself, and it was nothing short of thrilling to see Clark’s very first films, Dance in the Sun, featuring my former teacher, Daniel Nagrin. Murphy’s seminal film, Print Generation, proved to be one of the most satisfying experiences of the festival. A great idea, well executed and fully realized, strange and beautiful, and what’s more, it was made here here in Houston, while Murphy was teaching at the University of St. Thomas. Who knew? –  A bit of experimental film history happened just across the street from HCAF’s experimental hub, Cinema 16.