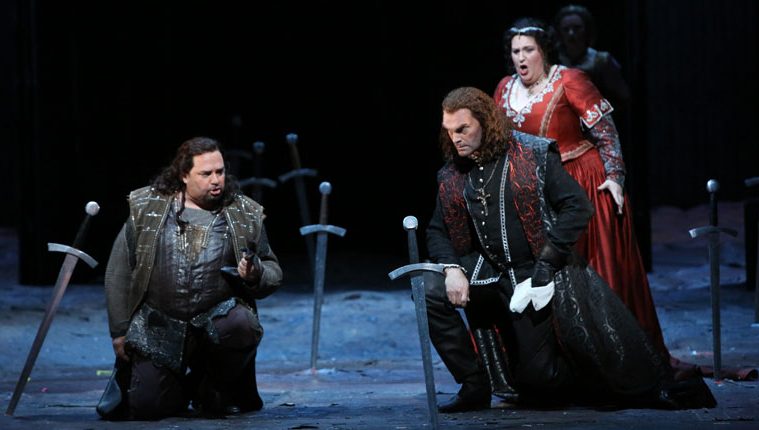 There are two sides to every story, illness but it’s easy to pick a favorite when the fight is between a sniveling Count and a fiery gypsy. Verdi’s ever-popular Il trovatore, Houston Grand Opera’s last production of the season, shows why revenge is something to savor.

First performed in Rome in 1853, the music in this opera is structured very differently from Wagner’s Tristan, HGO’s concurrent production. Verdi’s orchestration is simple by comparison, with light patterns in the strings and winds that double the vocal line rather than spiral into one of Wagner’s Leitmotifs. But there are still magnificent, difficult arias in Il trovatore, making this an opera heavily reliant on strong singers. And, under the reliably expert baton of Artistic and Music Director Patrick Summers, HGO delivered on all musical counts.

Tamara Wilson, a soprano who most recently graced the HGO stage as Elisabeth de Valois in last season’s similarly fiery Don Carlos, gave a stunning performance as Leonora. Torn from her beloved Manrico, now sentenced to death, Wilson captured the tragic “le pene del mio cor” (the pain in my heart) floating softly into high notes and perfectly hitting the pitch in difficult interval jumps. Singing the part of Manrico, Italian tenor Marco Berti’s voice has what is often missing in the high vocal range: tenacity. His tone was remarkably broad and powerful even up to the high C at the end of Act III.

High wooden walls completed this strong production. Sliding to reveal a fortress, a gypsy camp, and even a convent, the impenetrable wood brought a unity of place and unexpected elegance to the shifting tale of love and retribution. It’s hard for any opera to follow Wagner, but with singing like this production offers, HGO’s Il trovatore holds its own.