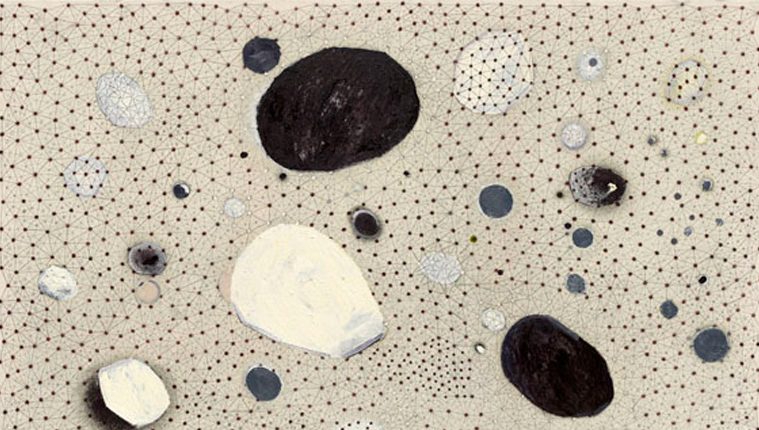 Ivory and dense– black forms dance across the walls at Texas Gallery. Vibrating with stillness, James Brown’s painting series Planets: The Distinct Connection offers us a meditation on the cosmic and metaphysical.

Brown creates a rhythm of hundreds of spots that are interconnected by pencil lines, forming a matrix that grounds and reacts to the larger shapes on the picture plane. Like a cartographer of the extraterrestrial, Brown drafts the relation of planets, asteroids, and yawning black holes.

While the artist elects to use a limited palette and nearly all of the shapes could be described as round, he creates ample variety by emphasizing the asymmetry of the larger forms and their placement in the composition. Brown uses untreated linen to support his imagery, achieving an organic physicality that complements his biomorphic shapes.

The larger planetary forms allow the artist’s spontaneity to show; areas caked with impasto freeze Brown’s gesture, while some areas have a thin glaze of paint that creates ghost-like sensations. Passages that appear stain-like up close give the larger forms substance when viewed from afar.

The series Planets: The Distinct Connection is actually the ninth group of a larger series of 81 paintings. Brown was inspired to respond to early 20th century English composer Gustav Holst’s composition The Planets, which was derived from the astrological qualities of the extraterrestrial planets in our solar system.

The inclusion of Brown’s earlier studies at the front of the exhibition space brings a welcome look into his process but also raises more questions. The studies are comparatively small, with the same untreated linen, which is occasionally folded – forming a different sort of network. We can see intimations of the planetary bodies seen throughout the space, but the presence of collaged images of snakes and hands prompts us to ponder his meaning further.

The progression of image size through the exhibition implies a sense of hierarchy. While the studies inform the Planets series, they are actually the preparation for a grand culmination in a tenth painting: The Realm of Chaos and Light: The Soul’s Distinct Connection. With the same vocabulary as the Planets paintings, this piece allows Brown a stunning eight-by-23 feet to show larger relationships between systems of forms. However, the title of this dominating piece suggests the previous nine paintings are part of a larger, heavenly system.

While it could be easy to retreat into formalism when viewing the exhibition, Brown implores us to consider the grander pleroma of what is simultaneously empty and infinite.