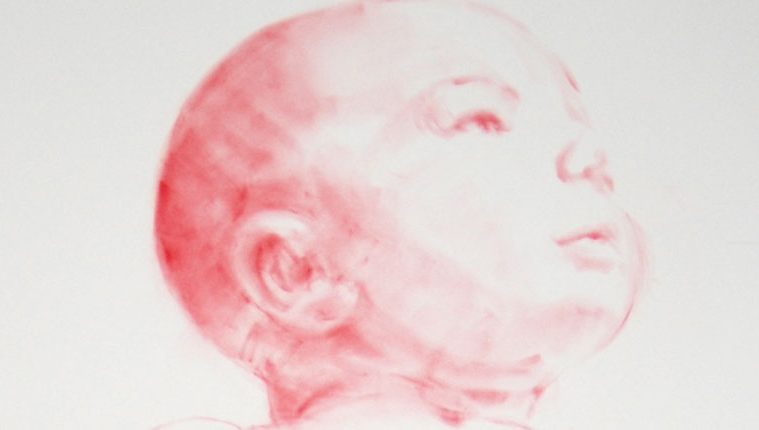 Now based in Santa Fe, James Drake is perhaps best known for his dark, large-scale drawings and for his engagement with the politics of his former residence on the Juarez-El Paso border. That darkness has given way to an airy, ethereal lightness in James Drake: Red Drawings & White Cut-Outs now on view at Moody Gallery. (The exhibition consists of ten pieces, one glass sculpture and nine large-scale works on paper; all but one early example date to the last two years.)

Drake is a masterful draftsman as evidenced by the delicate tonal variations he achieves with simple red pastel.  Two of the red drawings are extremely personal in nature: one, a portrait of his infant granddaughter, the other, a dual portrait of his mother and her mother. Two other drawings from 2010, Seated Man (Adam) and Seated Woman (Eve) appear to be portraits as well. While the artist claims they are fictional, the sitters’ highly individualized faces, intimately direct gazes, and emotionally expressive poses question this claim.

The white cut-out drawings evolved from his use of hand-cut stencils to imbue his massive charcoal drawings with crisp, precise edges. One day when laying the pochoir over a working sheet, Drake was struck by the play of shadows the negative spaces elicited. The subtraction drawings are negative images, absent of line, the tonal variation created by the chance of eclipsed light, yet they are also astoundingly intricate. In Insects with Mirror, 2010, Drake sets up a modern vanitas: excising an ornate frame along the perimeter of the sheet and adding four graphite flies to the titular mirror’s surface.

Moody has set up an affecting trio in the center of the gallery. Hung side by side, Pink Chandelier and Red Chandelier, both 2012, are an exercise in cause and effect. Drake first used Pink Chandelier sheet as a stencil, rubbing red pastel through the voids, to create Red Chandelier. He then reversed the stencil, now suffused with red pastel dust, and affixed it to a white backing sheet. The makings of Pink Chandelier are not immediately visible; the latent blush tones that run along the cut edges and are reflected off the backing sheet are soft, quiet, and incredibly sensuous. On the floor are the 35 pieces that make up Glass Tongues, 2012. Recalling Drake’s 2010 retrospective at the Station Museum of Contemporary Art, A Thousand Tongues Burn and Sing, the tongues are a product of Drake’s second stint at Seattle’s Pilchuck Glass School. At the foot of the pastels, the luminous Glass Tongues pick up on the dangling crystals of the rococo chandelier drawings. At the same time, they give a quiet edge to the deft handling and old-master panache of the surrounding pastels.