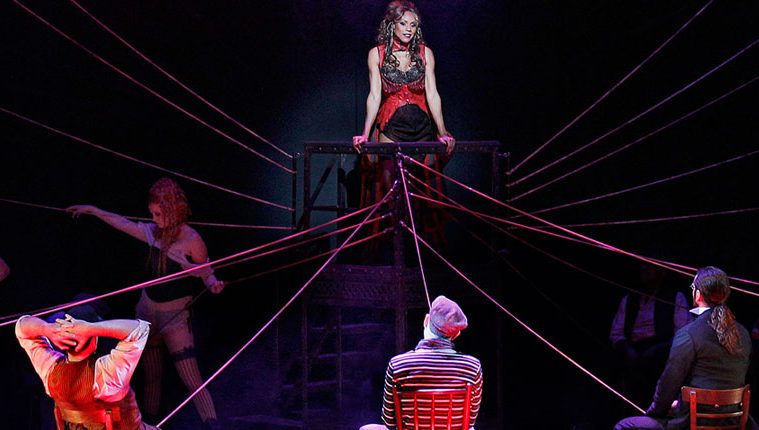 Guys can be so moody. Just in time for Halloween, Theatre Under the Stars (TUTS) returns to Jekyll & Hyde, with a newly conceived production, and the beginning of a long national tour that will end again on Broadway.

Deborah Cox and the Jekyll & Hyde company in “Bring on the Men.”
Photo by Chris Bennion.

Houston’s most famous homegrown musical premiered at the Alley Theatre in 1990, and went on to Broadway for a four-year run. Conceived by Steve Cuden and Frank Wildhorn, who also wrote the music, Jekyll & Hyde is based on Robert Louis Stevenson’s The Strange Case of Dr. Jekll and Mr. Hyde.

Gory stories make good musicals; Think Sweeny Todd.  But it’s the combination of an iconic story with plenty of pretty tunes that gives Jekyll & Hyde its staying power. Although this is Wildhorn’s greatest hit, it does seem to be missing that one killer good song that we all leave the theater humming.

Constantine Maroulis, last seen in another double role in The Toxic Avenger at the Alley Theatre, has the stage presence to pull off the dual roles. As Jekyll, he’s all meek, mild, and science focused. As Hyde, he’s all swagger and dagger, with enough vocal chops to power his diabolical doppelganger. The matinee, I mean American, Idol, is a charismatic performer, and gives much of this production its punch. (You can get your picture taken with a cardboard version of the brooding handsome hunk in the lobby.)

R & B sensation Deborah Cox is perfect as Lucy, while Teal Wick’s sweet soprano imbues Emma with innocence. Director/choreographer Jeff Calhoun plays up the gloom and doom. Just about every scene begins with an ominous sense that this is not going to turn out well.

Tobin Ost’s mostly black and white sets/costumes, along with Daniel Brodie’s  projections, frame the proceedings as a surreal parable, with a ghostly glow and lots of flashy moving parts. Jeff Croiter’s spooky stark lighting adds to the macabre mix. Just about everyone looks like they have recently recovered from the influenza.

It all went down a bit like a Victorian rock concert, on the edge of camp, but with enough heart to drive the dark drama.