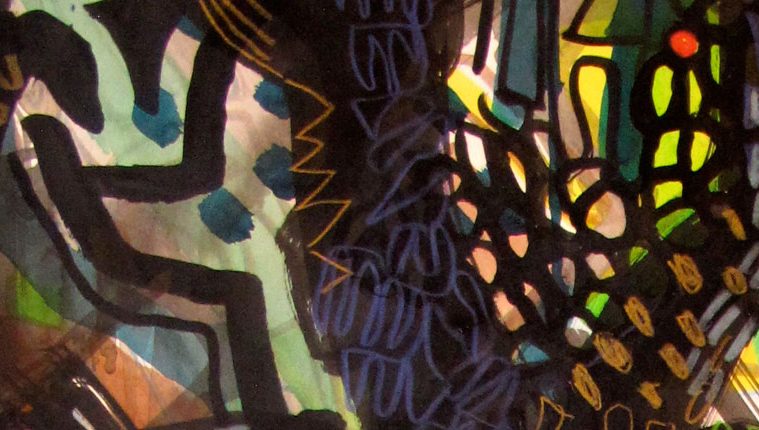 Jules Buck Jones’ show of new work at the Conduit Gallery through Thanksgiving weekend features dense, complex, colorful paintings of organic patterns on paper. Some as large as six by seven feet, this is some of the most compelling, unique, and biographical work by a young artist you’ll see for a long time to come.

Jones has an MFA from UT Austin, where he studied painting and printmaking, but his talent extends to sculpture and multimedia as well. The exhibit includes several videos that have a mature yet playful sense of theatricality. His interest in nature – both animals and environments – led him to accept an artist-in-residency in the Everglades a few years ago. One can’t help but think that this must have been a seminal locale for the development of his alluring layered style.

Thirty of the forty-some pieces in the show are variations on a theme: mixed media on paper of various sizes, these are impactful and dark but compelling looks at a landscape of abstracted dense vegetation. Against black, Jones has painted with cohesive palettes and made pictures that can be read in several ways. The best of them, when studied carefully, reveal camouflaged snakes, crocodile heads and teeth, and spiky armor among the leaves, branches, vines and water. They’re potentially frightening and ominous reminders that the viewer isn’t alone.

Jones’ technique is a clean and decisive mix of paint, ink, colored pencil or chalk, and graphite. Clearly exhibiting a work ethic that never mass produces, each of these paintings could be a different day or time of day in the manner of Monet’s various series of the same scene. A lush black ink wash grounds the works for the majestic jewel toned shapes and lines that follow, building layer upon layer.

Conduit Gallery is also showing two large – both greater than 6 by 6 feet – magnificent paintings from another of Jones’ series. These paintings do utilize the stark white of the ground to contrast with his subjects – owls in one, wolves in another. They’re painted as if they are portraits – maybe the same owl over again from a slightly different point of view or several portraits of the same wolf: straight on, three quarter view, profile and so on.

“Crepuscular Happening,” the owl painting, captures an ominous moment when a huge owl – or two – is headed straight for the viewer. It’s painted as a confusing flurry of fluttering feathers, angry piercing eyes, and long dangerous talons on the beast’s claws. Brilliantly cropped so that the action is all at the top of the painting, Jones’ palette is a sophisticated jumble of orange, yellow, brown, black and gray. It’s a really formidable piece.

While you’re there, take in the other shows at the Gallery – painter Jennie Ottinger’s tennis-themed “Doubles Trouble” and “Cosmopolitanism,” a collection of videos curated by Benjamin Lima.