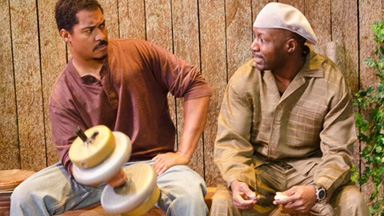 We’ve probably all heard some version of Chekhov’s maxim, that if a loaded gun is introduced on stage, it better be used before the play is through. In August, Wilson’s King Hedley II seems to bring a new weapon in each scene — one of a half-dozen pistols, a machete, a straight razor, and a knife — almost all of which are never put to more use than suspenseful brandishing.

But it’s not so much the piling of weapons on stage that charges the action of the play, as it is the revelation of well-worn physical and emotional scars that simmer like undefused bombs and explosions that wreak havoc whether there is a weapon at hand or not. The question then becomes not how a man or woman can arm themselves and not be expected to make good on that threat, but how a person can carry the mark or memory of a wound and not want to wholly devote themselves to regaining that loss violently and vengefully.

When we meet the title character, a member of royalty, but merely a man named King as his father was before him, we see a long scar across the left side of his face. King has already served seven years in prison for the retributive act of killing the man who gave him that scar, an act that though it was committed at a later time than the initial cut, King can’t see as being different from an act of self-defense, a comeuppance for what he sees not only as an act of violence but as a trespass on his person.

The other people in King’s life — his estranged mother, his wife, his best friend, and his neighbor — each in their own way face the same predicament of how to go on making a life in this world where bodies and souls are marked only by injustice. King can only fantasize that there is a halo over his head as plain to see as his burdensome scar.

Set in 1985, King Hedley II is part of Wilson’s award-winning ten-play Pittsburgh cycle, which charts the changing conditions and circumstances of life for African-American families in Pittsburgh’s Hill district during each decade of the 20th-century. This production marks the Ensemble Theatre’s completion of having produced every play in the cycle at least once, an admirable accomplishment in its own right, but also one from which the audience reaps the real reward of the company’s confident and well-honed sense of execution.

The production of the performance plays out like a film, with a transportive row-house back alley set design by James V. Thomas, and considerable use of background music to fill in segues and underscore revelations. While the script often devolves into long monologic stretches, the writing is consistently crisp as it balances tragedy, humor, hope, and despair. Broderick “Brod J” Jones shows great range as Mister, King’s partner in crime, cutting from boisterous laughter to a menacing snarl within the span of a few words. The entire cast also functions as a tight community of individuals who know how to get under each other’s skin.

Chekhov is right. The play ends with a burst from a firearm, but the heart of the play ends not with the gunshot, but with a glimpse that wounds might close on their own, blood might no longer need to be shed, and scars might once again become the sign of something having been healed. In real life, King seems to finally realize that you can choose to put the gun down.

–DAVID A. FEIL
David A. Feil is a writer and educator in Houston.