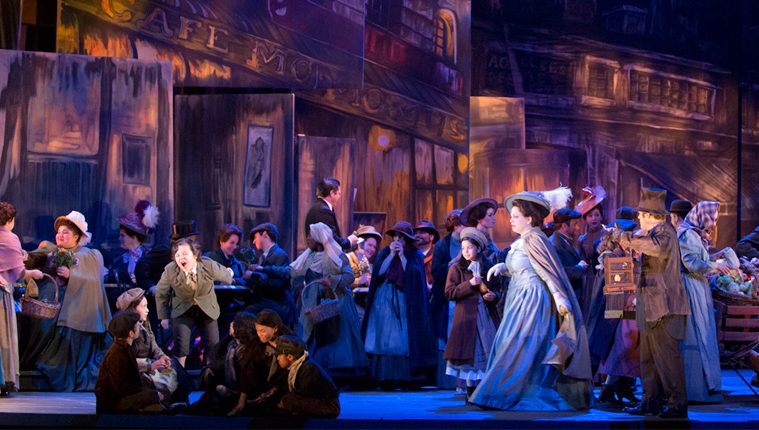 In Giacomo Puccini’s La bohème, doctor happiness is simply one hand to warm another. As a humming audience member made clear, the melodies Puccini wrote are stunning and memorable, making this opera a well-known favorite. It’s hard to capture Puccini’s original, effortless simplicity, and Houston Grand Opera just missed the mark.

Likewise, Conductor Evan Rogister pulled an unadulterated timbre from the orchestra, particularly from the soaring first violins, which gave the rest of the opera a fluent foundation.

From this foundation, though, the opera became over-determined. Soprano Katie Van Kooten, who was exquisite and delightful as Elizabeth I in last season’s Mary Stuart, didn’t capture the fragility of Mimi’s character. Though her voice is indeed deeply dramatic, her wide vibrato and most-often forte dynamic made her portrayal of “a flower blighted by poverty” (as Rodolfo sings in the final act) impossible.

The set, designed by David Farley, while entirely appropriate and pleasing, could have done with some editing. The concept of the artist’s hovel created by an array of hanging canvasses is a good one, but there was just too much of it.

Likewise, the stage became crowded during the market scene where it seemed as though every possible character in the Latin Quarter had to be present. There was nothing exactly wrong in this portrayal—it was just unbalanced. It doesn’t take much to impress poverty and convey a “starving artist” vibe. Less is more in Puccini’s case.

Still, HGO offers a solid version of La bohème. Puccini’s opera is a joy to listen to and a delight to watch, despite its occasional excess here. If there can be too much of a good thing, perhaps it is in this production.