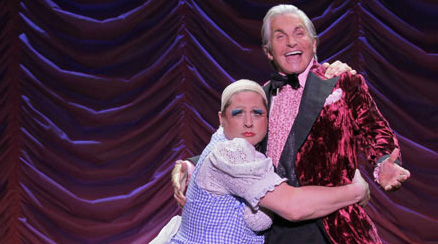 George Hamilton at Georges, Christopher Sieber as Zaza and the cast. Photo by Paul Kolnik.

Theatre Under the Stars
April 23-May 5

George Hamilton kissed a guy. OK, so a few other things happened before that in the Theatre Under the Stars production of La Cage aux Folles, starring the ever-bronzed Hamilton as Georges and Broadway veteran Christopher Sieber as Albin.

La Cage, suitably received six Tonys when it premiered in 1983, and even more for its revivals in 2004 and 2010.  It has staying power for all the right reasons: it’s a heart warming story, the music is divine, and we are still in the thick of the gay rights debate. The tale focuses on the mayhem that occurs when Georges’s son Jean-Michel (who was raised by both Georges and Albin), returns to announce he is marrying the daughter of an antigay politician. Of course, Jean-Michel wants them to play it straight, which allows for some hilarious imitations of John Wayne’s famous walk.

With some half of the country still in favor of denying human rights to gay couples, it’s amazing how fresh the idea that a family is made up of people who love each other, regardless of gender, can be. I never tire of that message, and I guarantee there were few dry eyes in the house when Jean Michel (Michael Lowney) apologizes to his mother (Albin) for trying to hide his identity from his stuffy conservative future in-laws.

With music by Jerry Herman and based on a book by Harvey Fierstein, it’s hard to mess up this material. Director Terry Johnson didn’t venture too far off the La Cage path, and generally, it was one fun night.

Though Hamilton was a tad wooden (possibly due to an injury), he’s still such an iconic Hollywood feature that we just want to cut him some slack. Sieber, who played opposite Fierstein on Broadway, is simply divine in the role. He’s such a terrifically physical comedian. I left humming the soaring La Cage anthem “The Best Of Times” and wanting to kiss George Hamilton.