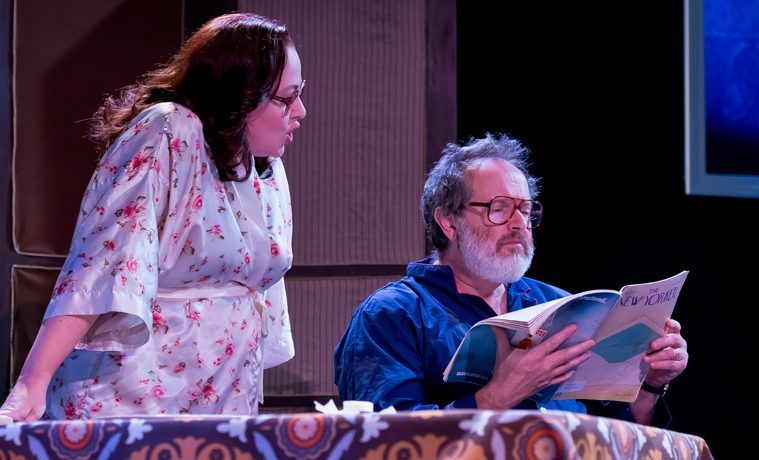 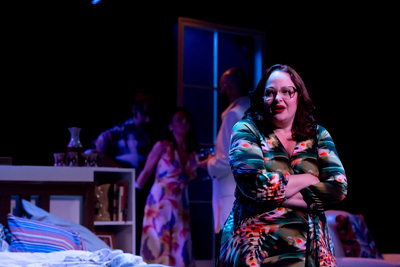 After seeing Catastrophic Theatre’s new production of the 1979 darkest of comedies, Marie and Bruce by Wallace Shawn, it wasn’t until the cold night air hit me as I left the theater that I realized director Jason Nodler had just given me the theatrical equivalent of a flu shot.

Going in to the play, I knew the experience would stay with me, though the ninety minutes might (and did) turn out to be rather trying. There’s a figurative jab and sting, a weakened toxin injected under the skin, a few drops of blood spilled. But now, having been inoculated with Maria and Bruce’s misery, my body is primed to defend itself from whatever nastiness that might be lurking within all the smiling humanity I encounter over the holidays.

Marie and Bruce takes place over one day, a seemly significant day in an awful marriage. What makes this day different from all the others before and probably afterwards is that this is the day Marie, played by Tamarie Cooper, will tell Charlie Scott’s Bruce she never loved him and plans on leaving him.

The audience enters into the space, Marie and Bruce’s apartment, with the characters already on stage and in bed, so metaphorically we move directly into their marriage. Bruce sleeps. Marie stews in her resentment. These moments before the day and play officially begin will be the most peace they, and we, get until the house lights rise and we are released.

Very little happens on this hot, summer, New York day. Marie forces Bruce to wake early and make her coffee. She prods him into movement with profanity laden insults, but she soliloquies to the audience so often it was difficult for me to be certain how much Bruce was actually hearing. His only defense to her acidic attitude is a feigned cheerful obliviousness and the constant use of “Darling,” sometimes as a shield, other times a knife.

He leaves. She preps. They meet back up that evening at a party, where they both get drunk. They go to dinner afterwards. The play is obviously not about plot; instead, the depth comes from the language and remarkable performances. Even Marie’s diatribes about filth and shit, usually aimed at Bruce, hold a kind of poetry. When Marie then Bruce tell the audience, but never each other, the worlds they explored during their day separated, Cooper and Scott recreate them into different people, beautiful almost wondrous people, though in Bruce’s case also somewhat of a lecherous nut. 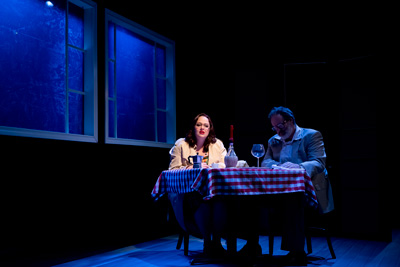 This is something of an anniversary production for Catastrophic, as Nodler directed Cooper and Scott as Marie and Bruce in 1999. I regret I never saw that production because it would have been fascinating to compare how almost 15 years changes the timber of the direction and performances. Both Cooper and Scott layer their portrayal with a weariness of years that I wonder would have been possible for each to depict in the first production.

The rest of the cast play obnoxious party goers and restaurant patrons who give the audience much needed short breaks from the tension. Most notable is Kyle Sturdivant’s ability to turn a several minute monologue about diarrhea into a refreshing respite from Marie and Bruce’s self-inflicted torment.

Laura Fine Hawkes’ set contributes greatly to the the late 70s feel of the play, while also reflecting Marie and Bruce’s inertia. The couple’s apartment becomes the cocktail party, becomes the restaurant, without changing a prop, so that as Marie and Bruce travel through the city, they are also always stuck back in their marriage.

Marie and Bruce is never a fun night of theater, though it did garner lots of very uncomfortable laughs from the majority of the audience. But in the end, it might work as a vaccine against all the forced happiness we’re supposed to have this season. On the bleakest of nights, when it might seem that the whole world is being joyous, a bit of Marie and Bruce could live on inside us charging our psychological immune system with the knowledge it could always be much, much worse.