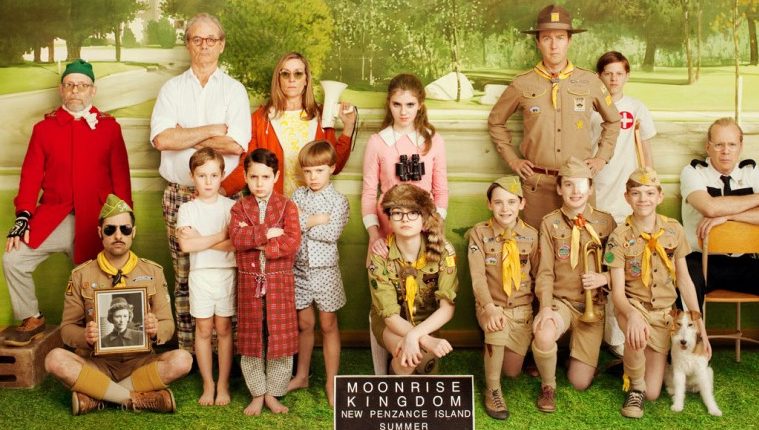 I don’t know Wes Anderson personally, but I really think the main child character in the film, Sam Shakusky, could have been Wes Anderson growing up. After all, I think Anderson is still a kid at heart trapped inside a brilliant adult filmmaker’s body. The way he tells his stories are so whimsical and full of youthful adventures and romance. Moonrise Kingdom shows us just that, and this time with actual kids rather than Anderson’s previous films that show emotionally damaged adults that never managed to grow up. This brings to the forefront a charming, sweet, and optimistic tone that was otherwise missing from Anderson’s previous films.

Moonrise Kingdom starts out much like the rest of his films with a narrator telling us where we are and setting up the story by introducing locations and characters. We are on a very small island near the New England states with a very large and destructive storm nearing the island. The film follows the young Sam Shakusky (newcomer Jared Gilman), who has quit his Scout Troop in order to avoid the torment from his fellow scouts. He escapes to live in the woods, which we find out was planned months ago with his young sweetheart girlfriend, Suzy Bishop (newcomer Kara Hayward). Suzy and Sam are both loners and oddballs who have been writing each other love letters and planning their escape for some time. Through the reading of these letters, the audience learns the personal details of their difficult lives and their desire to live with each other away from the island.

The two meet at their secret rendezvous, and they set out to live in the wilderness armed only with food, binoculars, sci-fi books, a French pop record, a pet cat, and a pair of scissors. Sam is an exceptional scout and shows us he has great knowledge of camping and providing food and shelter for his one true soul mate. Suzy shows herself to be a constant loyalist, standing by her beau no matter the cost. The two lovebirds are pursued by Sam’s militant boy scout troop lead by their troop master, Randy (Edward Norton); Captain Sharp (Bruce Willis), who is seemingly the only law enforcement on the island; and Suzy’s dejected and miserable parents, Walt (Billy Murray) and Laura (Frances McDormand), who seem to hate each other more than they love their children.

Every character has a unique voice and perspective, and together they create a philosophical rumination on the meaning of love and self-discovery. Norton plays a nerdy and funny scout leader who is in over his head when his scout troop falls apart. We see his character overcome his foolishness and self-doubt to become the leader he was born to be. Norton, of course, does an exceptional acting job. Willis’s Captain Sharp is much like Sam in that they’re both in love with people at the wrong time. They are bound to one another through their suffering. Gilman and Hayward, the two young actors, really shine in Moonrise Kingdom. Much like Anderson’s previous main characters, Sam and Suzy declare their love with so much passion and are pleased to show it, even with that famous Anderson philosophical soft dialogue.

Wes Anderson once again has brought us in a very distinct and idiosyncratic world with his visual wit, flawless production, and outstanding set design. Every scene and piece of dialogue is as important as the entire story, and the music and other hidden gems are placed throughout the film perfectly. Moonrise Kingdom is an exquisitely sculpted film about an unconventional, yet charming and delightful young love. Moonrise Kingdom will have you begging for more and wanting to see it again and again for years to come.