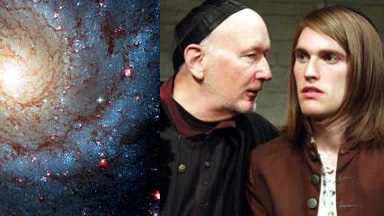 In 1656, rabbi prospect and philosophy student Baruch de Spinoza gets interrogated at his Amsterdam temple for ideas that threaten the worldview and security of the town’s powers that be. He spreads radical ideas in a public place and poisons the minds of impressionable young people. He’s way smarter than his baffled inquisitors and a wisecracking futurist, as well.

Ives’ Spinoza comes across as an earthy, impatient, gullible lad. He shares his philosophical and theological musings with anyone who will listen. His compulsive dedication to the search for truth blinds him to the enormity of the applecart he upsets and the dilemma he creates for his community elders.

Stage West cast newcomer Garrett Storms in the role. His Baruch wins the audience’s hearts as he tries their patience and strains the status quo to the breaking point with his total refusal to recant. Next in importance in Ives’ play is the wise, worldly Rabbi Saul Levi Mortera. Baruch’s teacher and spiritual adviser, he’s his father figure. He hopes to see the young Jew inherit his leadership role as congregation rabbi. Jim Covault brings a grave, Moses-like wisdom to this role. Covault lets us see the rabbi’s heart break with the decision to banish Spinoza but also conveys his recognition that youth’s ideas herald the future, the “new” Jerusalem. An inner light bathes his face even as he sheds tears in banishing his student. As Amsterdam bureaucrat and head investigator, Abraham Van Valkenburgh, Russell Dean Schultz portrays Abraham at first as an unsympathetic, unyielding man, seemingly bent on preserving the status quo. Schultz transforms Abraham into a feeling human being faced with a serious governance challenges. It’s impossible to leave Stage West after attending “New Jerusalem” without a spring in the step and strengthened hope for a better, more enlightened tomorrow. Stage West’s dignified production of David Ives’ “New Jerusalem” sets regional artistic production standards high for 2012.