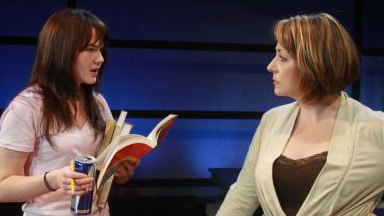 Review: Next to Normal

If someone told me that the minute the curtain came down after the first time seeing Next To Normal, that I would voluntarily see it again, I would have responded, “Honey, go take your meds.”

But there I was, along with a packed house at Stages Repertory Theatre, going for a second dose of Tom Kitt and Brian Yorkey’s 2010 Pulitzer Prize-winning musical. I’m glad I did, because Stages did a smashing job with the piece, and during the first time around, I couldn’t get beyond my, “Wow, this is a musical about a woman with bi-polar disorder,” thought cycle.

Nearly two years later, I could finally pay attention to the details of Kitt and Yorkey’s poignant and gut wrenching emotional roller coaster of a musical. Stages handled those details with the utmost elegance. First off, is Happy McPartlin’s penetrating portrayal of Diana, the woman who doesn’t really ever make it to a place called “Next to Normal.”

Kregg Dailey’s warm tenor voice imbues both of Diana’s doctors with a mixed sense of hope and betrayal. Mark Ivy and Rebekah Stevens, as Henry and Natalie, come as close to stealing the show as possible (but ultimately, it was still McPartlin’s show).  With their honesty and pitch-perfect adolescent angst, combined with strong voices, these are two performers to watch.

Melissa Rain Anderson’s uncluttered direction and choreography lets this difficult material stand on its own. The dancing office chairs, however, did add a welcome levity. Ryan McGettigan’s spare set follows Anderson’s lead by framing the action and getting out of the way.