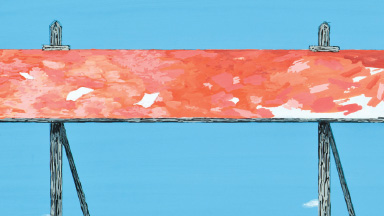 At Hiram Butler Gallery, malady three different approaches to landscape painting make for an intriguing show of small works that ask us to reflect on our interactions with the Earth.

Although it would be tempting to call Brooke Stroud’s compact works minimalist, story this would seem to discount the lush textures evoked by his linear compositions. Composed in horizontal lines of colored pencil on board, each piece evokes a state of meditation and surprise that reminds the viewer of the compact but explosive nature of haiku. This is no accident; for these works, Stroud drew his palette from Japanese woodcuts, which are reflected in titles such as “The Plum Garden” and “Steps to a Shrine.” Bits of board peek strategically through the pencil, adding depth to the juxtapositions of color. The evidence of care and craft in these tiny works gives them a sizable impact.

Anyone who has put in some time on the highways and country roads of Texas will recognize the landscapes presented in Julie Bozzi’s paintings. Their strongly horizontal format echoes both a car window and the big sky that dominates the flat horizons of South Texas; the edge of pavement revealed in the foreground of these works speaks to the human imprint on these rural spaces. Bozzi’s hand reveals a thoughtful connection with her subject. The scrubby mesquite bushes screening the rusty profile of a railroad track in “Untitled (Mesquite Prairie)” are especially enchanting. Sometimes bright, sometimes foreboding, these works pull us into the strange beauty of moments that pass as quickly as the views whisk by a car window.

Three works by Will Henry also capture Texas landscapes, this time those of West Texas’ desert terrain and expansive blue skies. Bright skies against dark sand lend these works an aura that both attracts and puts the viewer on guard. Each painting comments on human presence and absence; in “Spaghetti Western,” an aged wooden sign without text dominates the foreground, while the white spokes of a wind farm are just visible in the distance. In between, a flurry of sand dances in the air. In “In Tandem,” a faded red sign dominates the work, yet tells us nothing. A sense of humor is reflected in Henry’s painterly approach to these subjects, capturing both arrested motion as the desert reclaims itself from our intrusion.

— TRIA WOOD
Tria Wood is a writer who lives and works in Houston, Texas. She teaches English and creative writing at San Jacinto College South and through the Writers in the Schools program.