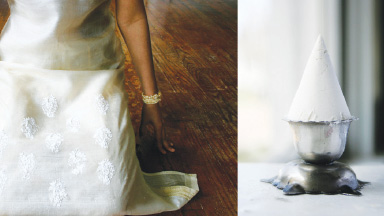 Priya Kambli’s “Color Falls Down” is one of three new exhibitions to open at the Houston Center for Photography. Part of the FotoFest Biennial 2012, the individual exhibitions by the three photographers all explore the domestic realm, though in decidedly different ways. Kambli’s works are the smallest in terms of number and scale but her works more than hold their own against the larger works of her fellow exhibiting artists, emitting a quietude that is powerful and compelling.

According to the exhibition essay that accompanies the exhibit, Indian-born Priya Kambli lost both of her parents as a teenager and then moved to the United States shortly thereafter. Each of the nine photographs in the series is a digital composite of imagery. Sepia-toned family photographs often appear alongside self-portraits of the artist, occasionally separated or framed by embroidered borders in color atop faint backgrounds of cloth. Knowing of the artist’s loss of her parents at a fairly young age it is near impossible to read the images in the series as anything other an attempt to remember her familial body.

In the diptych “Me (Polpat and Tumeric),” the spice tumeric is flattened and spread against the surface of a circular slab. The yellow hue of the spice figures prominently against the pale white tones of the slab. On the right side of the photograph is a self-portrait of the artist. Clothed in traditional Indian garb she sits cross-legged in a mustard colored armchair, in a floor-length pea-green skirt, her linked hands clasped over her knee. Tumeric is caked over the length of her arms. Another self-portrait titled “Me (Flour)” depicts the artist kneeling on a wooden floor in a white gown that is decorated in a botanical pattern that appears to be made with flour. The work is also a diptych; beside it is a pewter tin containing a cone of white flour. This half of the work image, dominated by white and silver tones, appears to be devoid of color. The overlapping elements of tone, cloth and food serve to invokes the senses and convey textural properties that extend beyond the two-dimensional surface of each print.

It is interesting that none of the images of the artist depict her face. Kambli’s works seem to attest to a loss of identity and fragmentation that occurred on both cultural and geographical levels. Through her depicted fusion of corporeality and materiality the artist once again becomes whole.