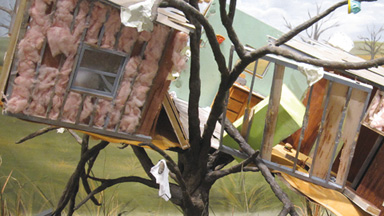 The Lawndale Art Center’s, Prospectors show features the three latest residents to complete the Artist Studio Program. While the artists each work according to their independent visions, a common thread emerges in a human’s relationship with the natural world.

David Politzer is a self-aware, contemporary landscape photographer who explores the duality of landscape imagery, which is sublime, yet often clichéd. Politzer’s work recognizes this trouble with the landscape by examining the conflict with man’s desire to live within the sublime, but in a safe, homogenized way.

Anne J. Regan’s objects explore music in the context of memory, idolatry, and macabre Americana. Regan created many of the objects over a pilgrimage across the South and West, visiting sites of spiritual and musical importance. In a nod to both music and hoodoo traditions, Lightnin’ Wand is a conductor’s baton that Regan had buried in the soil above Lightnin’ Hopkin’s grave for seven days, presumably imbued with spiritual power.

Most interesting was Billie’s Fridge, a mini-fridge with a glass door stocked with everything, including a 1946 grocery list made by Billie Holiday. On opening day, the work acted as an invitation to live like a celebrity. The tone slowly changes to a meditation on the temporal, as the produce withers with time, but other foods are seemingly immortal – preserved by additives or packaging. While music is a difficult subject to encapsulate completely in the visual arts, one is left wondering if Regan intended to expose how disquieting obsessive fandom can become, or if her rituals were entirely in earnest.

Exploring the plight of the Gulf Coast average Joe, Seth Mittag’s medium is stop-motion animation and sculpture with a subtle jab of realism. Electing to exhibit models and stills from his animation work, Mittag parses and fractures two narratives focused on how a man deals with natural disaster and a predatory housing industry.

We’re Still Here… introduces the viewer into this world with a model of a large, dilapidated trailer wrapped around a tree, as if demolished by a hurricane or tornado. The story continues through a series of printed stills that function as a storyboard. Coming full circle, Mittag’s work culminates in Hurricane Allen Newscast, an understated model television. The tiny television impressively uses a hidden rear projector to play a stop motion video using audio from an actual 1980 San Antonio newscast.

However disparate the works may seem, the three artists appear to converge on the dilemma of our relationship with the natural order. Whether to control, cooperate, or live at the peril of the forces that be.