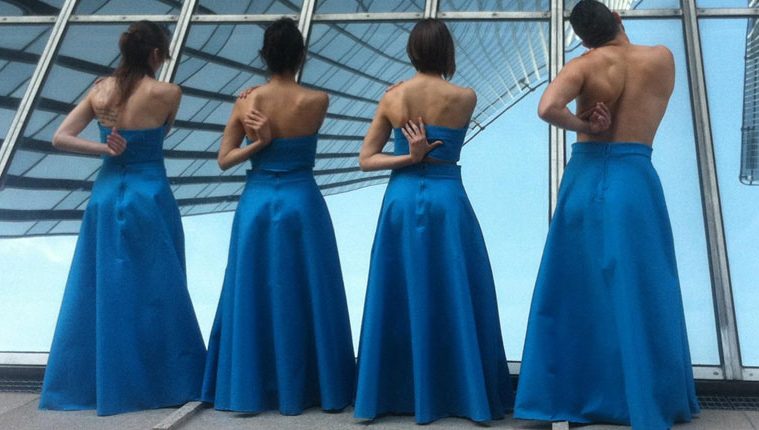 Dance and film are joined by movement as camera and body come together. Frame Dance Productions’ newest offering, Quiver, makes the most of that fact. Frame Dance artistic director Lydia Hance navigates a dual career track, exploring both film and live performance, and the intersection of both.

Quiver opens with an oscillating pulse of a blurry dancer, with a quick cut to Alex Soares standing guard, setting a tone of fracture and recovery, commotion and stillness. The visual rhythm of turbulence and calm becomes the underlying current in Quiver. Eerie electronic music by Mark Hirsch amplifies the unsettling elements, punctuating the piece with shifts in sonic structure to galvanize our attention. The duality is further explored in alternating between interior and outside shots.

Shot in and around the Pennzoil Place building, Quiver follows a tribe of movers, clad in Ashley Horn’s minimalist cobalt blue felt skirts. The flesh tones of their skin, combined with the fuzzy felt of their skirts, makes a strong juxtaposition to the surrounding gray steel architecture. Throughout, there’s attention to the sharp contrast between body and building. The curved outlines of Hance’s choreography are viewed through the linear grid of the building. Even the way the felt skirts hold their rounded contours adds to the play of textures, creating a middle ground between skin and steel.  Hance frames her dancers in each shot with a keen eye for proportion, letting the shot’s visual organization register before a movement sequence begins. Each scene feels composed with attention to its larger container of the building, city and sky.

Close up shots take us inside the tribe’s interaction. We never know who or why it exists, yet a ritual element surfaces. Like human post-modern dance gargoyles, they seem to protect the building, adding a touch of elegance to the mundane background of passing cars. Intense performances by Jacquelyne Jay Boe, Laura Gutierrez, Brit Wallis and Soares give the film its punch.

Quiver may be the least whimsical and most otherworldly of Hance’s films, and feels like a move toward a serious discussion of the mover in an urban landscape.