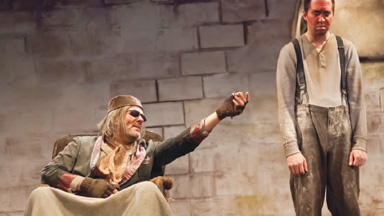 You have to hand it to the Catastrophic Theatre and director Jason Nodler. First they decide to tackle Samuel Beckett, one of the most unorthodox and absurdist writers of the 20th century. On top of this challenge, they chose to take on one of his most complex works, “Endgame.”

The majority of the play follows the scattered dialogue between Hamm, portrayed with an intense brilliance, by Greg Dean, and Clov, played perfectly by Troy Schulze. The world of “Endgame” is mostly unclear, purposefully. Hamm is both blind and unable to walk and relies on Clov, who is unable to sit, to do his bidding.

The characters reside in a dank, bricked, cell-like space with nothing but two windows to give any appearance of an outside world. The other side of their confines is likened to hell; they live “down among the dead.” Or maybe it’s purgatory and their existence is then just a waiting game? Hamm repeatedly begs Clov to finish him, death being the only escape worth looking forward to.

If Hamm and Clov are in the bowels of Dante’s “Inferno” then their punishment is that of monotony and repetition. Their conversations consist of a series of starts and stops. At times, Hamm is fraught with emotion to a blank-faced Clov and then the characters about face and it is Clov who demands sympathy. The same questions are asked over and over, reaching a level of sheer insanity. Each day is identical to its predecessor; the same “farce, day after day,” as described by Clov.

For being blind and immobile, Hamm is a force to be reckoned with, and Dean plays him with a delightful, egotistical vigor. Schulze’s Clov is Hamm’s counter; he just seems terribly bored with it all. He shuffles around the room, sighing heavily out of annoyance, rather than despair.

Of course, as this is Beckett, there is absurd humor as well. Hamm’s parents, Nagg and Nell, pop out of oil barrels that they apparently live in. Joel Orr plays Nagg for laughs, with a squeaky, highpitched voice that gives him a childlike persona, especially when lashing out against Hamm in a veritable temper tantrum. In contrast, Nell, played by Mikelle Johnson, speaks in a stark monotone, delivering her lines with a deadpan humor.

Nell mentions that, “nothing is funnier than unhappiness,” which, given the character’s dreadful existence, combined with laugh-out-loud dialogue, sums up much of the play. Catastrophic’s production of the very funny and terribly unhappy “Endgame” is another masterpiece in the company’s ever-mounting stack of successes.

— ABBY KOENIG
Abby Koenig is a Mass Communications professor at Houston Community College, a creative writer and playwright. She writes about all things art and culture for the Houston Press’ Art Attack blog, www. blogs.houstonpress.com/artattack.