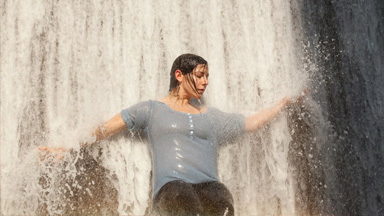 Water has a beckoning presence.

Stephan Koplowitz’s Natural Acts in Artificial Water sprawled out over the Gerald D. Hines Waterwall Park in several discrete sections, each quite complete, yet making way for what came next.

The first section addressed the clean lines of the Williams Tower. Using straightforward gestures and shapes, the dancers echoed the building’s grace and simplicity. From there, they hit the lawn for somersaults and frolic in a free wheeling romp. Wee ones where tempted to join in the fun.

The lightness from the lawn dance dissipated into a more melancholic tone as the dancers attached themselves to trees, as if to listen or join the structure of their bases. Later on, they wove through the majestic canopy of oaks, replacing each other in a lone walk out of the park, directly under the pinnacle of the canopy. The framing had a cinematic feel.

The tree section ended in a satisfying symmetry. Meanwhile, back at the Waterwall, the dancers set us up for the final, epic section of the piece. It’s as if the water was calling from the beginning, and the dancers must dutifully return to their home ground.

After a brief and highly structured episode relating to the arches, the performers disappeared, and this is when Natural Acts took flight. We followed them around to the exterior back of the wall, where we found them already immersed in the water’s downpour, drenched, running their hands through the thundering flood from above. It’s as if we had interrupted a sacred ritual, which had begun before we arrived. It caught us off guard.

Again, they preceded us, ending up in the interior of the fountain, whose flow mysteriously stopped as they approached. Slowly, they climbed up to stand on a narrow ledge, looking up with fearless resolve to pointed shards of water that then descended upon them. It was hard not to gasp. They literally received the water, in a baptism of sorts. We shifted from audience to witness. It was in these sensual and ecstatic moments that Natural Acts reached its zenith.

Natural Acts in Artificial Water was presented by DiverseWorks, in conjunction with University of Houston Cynthia Woods Mitchell Center for the Arts and Aurora Picture Show as part of the Insight|Out festival. It was by far the most significant dance site-specific work in the city’s history, and a poignant reminder that holiness can be found in your hometown fountain.