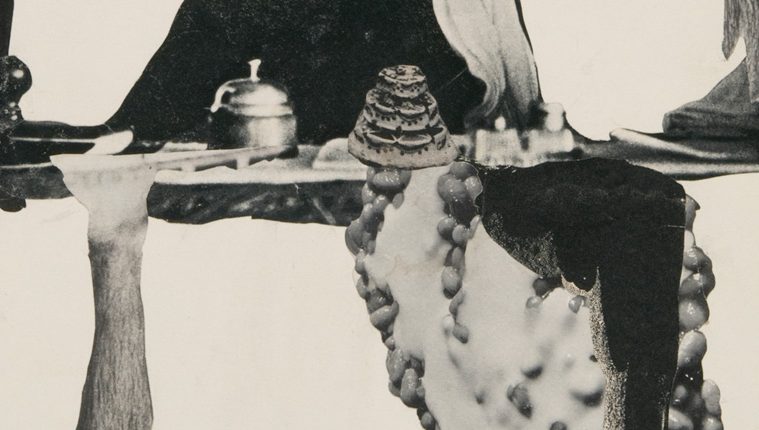 What lies inside of an egg? The shape of a chicken’s egg does not itself give us a hint as to the shape of a chicken, nor upon cracking the smooth and featureless shell does the color or consistency of the yolk clue us in to the complex organism that might have gestated within.

These immediate and familiar understandings of the egg do not further our understanding of such a future creature. Scientific inquiry aside, the connection between present egg and future being is left to our everyday sense of wonder, while at the same time the sense of potential life and animation lends the egg a meaning beyond its visible, experiential parts.

The Menil Collection’s new exhibit of Claes Oldenburg’s collage series Strange Eggs similarly causes one to ask: How do I encounter a strange egg? What does it contain? What does it conceal? What will it become?

Occupying its own room in the Surrealism gallery, the exhibit is comprised of eighteen individually hung collages, each composed of black-and-white newsprint clippings glued to otherwise plain white paper. With a few subtle exceptions, the images created are self-contained forms, solid objects of gray-scale matter defined within the white space. In the first piece of the series, Strange Egg I, the two clippings, one of which looks like rough stone, the other like rippled water, constitute a single oblong shape, this type of self-contained unity visually echoes that of the familiar egg.

As the series progresses, however, the shapes of the collaged images begin to ooze and jut out in shapes more similar, at first, to the shattered shells and splattered yolks of an egg cracked open. But reading the images at the level of their being visually similar to eggs gives Oldenburg little credit, and the last few pieces bear nothing of this original resemblance anyway. More compellingly, one might read the collages as eggs at the level of conceptual structure, as cryptic containers of gestation, combinations of disparate elements that we must accept will lead somewhere beyond our ability to predict or wonder.

At the time Oldenburg was creating these collages (1957-1958), he was also creating collage-like poems based on his sensory experiences walking through New York City. In her accompanying text for the exhibit, curator Michelle White quotes one such poem from 1956: “knocking moonhorns / fast dancing in a gas dream / red spelling in the strange egg.” In the final line, Oldenburg appears to be reading the city itself as “the strange egg” rather than “the big apple.”

The insight of this idea of the city, which can similarly be seen to be composed out of the stark juxtaposition and odd accumulation of elements (social, architectural, zoological), is that the parts may be understandable at the level of experience, as with the egg, as with collage, but that the meaning, the future, the creature, that the city contains is inaccessible. The critical intersection where such generative powers of art, of life, and of cities meet becomes an interesting vantage point from which to more closely examine the collages and pick apart their construction.

The sort of clinical sterility of their gray-on-white presentation gives way to humor, absurdity, visual lyricism, and, always, further mystery. By housing this exhibit in the Surrealism gallery, White has created a type of — appropriately enough — incubation chamber. After spending some time among the Strange Eggs, I found all sorts of new and wondrous thoughts hatching from the Ernsts and Magrittes and Tanguys.

-DAVID A. FEIL
David A. Feil is a writer and educator in Houston.