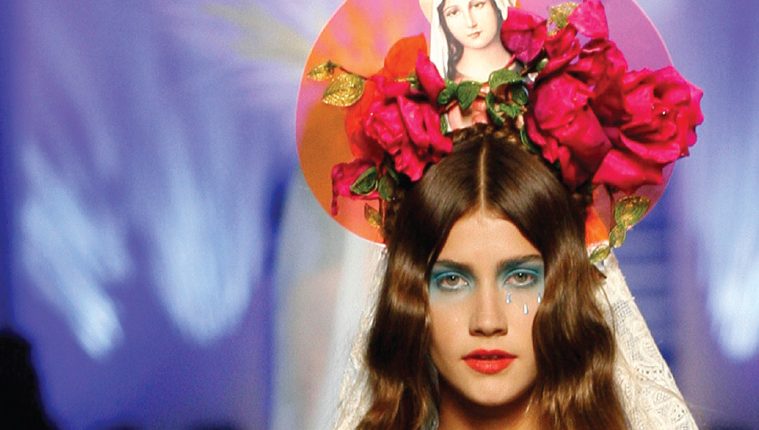 Whether we are willing to admit it or not, most of us share a fascination for celebrity. Beauty, power and wealth are big draws with strong ties to the Seven Deadlies and who among us is wholly immune? Actors and music stars exert substantial tugs on our psyches that merit examination. That being said, someone could pose a pertinent question — but no one ever does — should our infatuation with celebrity, contemporary fashion included, fall within the purview of museums? If it sparks our psyches in ways managed by Matisse, Fra Angelico or Lucian Freud, it’s news to me. If it doesn’t, it should merely fascinate us from within the luminous pages of “Vogue” and a throng of other expensively printed magazines. Then any frenzy for frocks and pointy cones and s-and-m-ish strappy garments could validly be eschewed by museums. Designers, Gaultier included, may be brilliant in their sartorial world but that doesn’t de facto give them heft in other venues. In fact, when museums begin to curate what Madonna wears, it comes off as a tawdry play for dough. As a culture, we should be better than that.

However, if the decision is made to put on a show, it should be done well. If fashion is art, then give it its fair due. Put it in a space where you can at least see it. Unfortunately, “The Fashion World of Jean Paul Gaultier: From the Sidewalk to the Catwalk” isn’t presented in ways that show the garments to their best advantage. It’s so over the top in an unvarnished attempt to be a crowd pleaser that it emerges as a wretched combo of State-Fair-Meets-Howdy-Doody. The show features engineered talking heads and rolling eyeballs to simulate ersatz hip folks. In all fairness, these Fashion-Bots, eerie and goofy though they are, were part of the original “traveling show.” But that’s not the end of the story. These yammering mannequins came to the DMA only to be parked in rooms that are decorative horror shows. Neon red lights are (literally) eye-popping. They’re wince-inducing and destroy any focus on Gaultier’s “art” ostensibly capable of inspiring awe. Another room offers cheap-looking picture-frame paneling that’s reminiscent of mobile homes. But the clothing? Oh, yes, there’s that. Metaphorically speaking, the theater is so exhausting that there’s no juju left for the show. This is a fiasco of an installation. Visit Barney’s NorthPark on any given day and you’ll find mind-bendingly gorgeous displays that are inventive and clever. Moreover they allow you to see the merchandise. Why can’t a “world-class” museum do the same?

The Gaultier exhibition as it was shown in Montreal was more appropriately presented. In one case, the fashion was shown against sophisticated skylines. A darkly lit cityscape is an appropriate backdrop for outré fashion. Someone should inform the DMA that blinding, reflective glare is not a top choice for showing off the genius of Gaultier. If you’re showing eye candy, it should be fun. Somehow the only fun the DMA managed to infuse into this show resides in a woeful case of dysfunction. The exhibition doesn’t work. Not because Gaultier isn’t a fashion genius. It’s simply poorly orchestrated. Unlike Montreal, the DMA serves up a lukewarm mess of poor lighting, poor installation and a punishing display that makes Big D look like the dopey stereotype you hope to dismiss when you vacation in Europe. And that’s a shame.