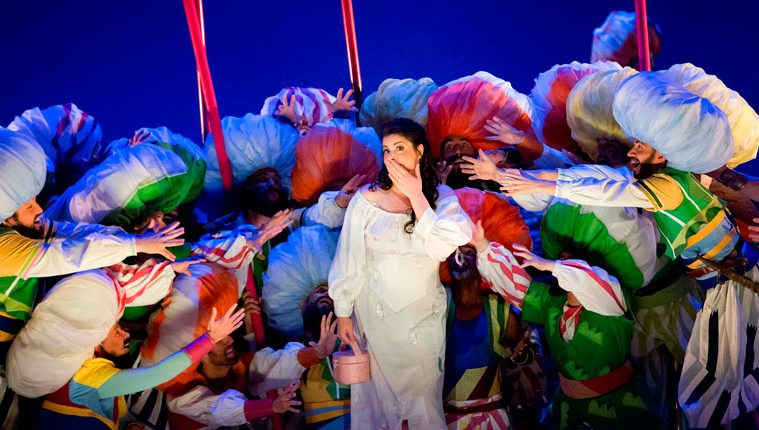 Review: The Italian Girl in Algiers

Giant hats, medical a suspended cage, viagra growing sand castles and balloons in the shape of Italy are just a few of the comic objects blown wonderfully out of proportion in Houston Grand Opera’s production of The Italian Girl in Algiers by Gioacchino Rossini. A delight of objects, this opera shows one of these things is not like the other, but all of these things do belong.

This staging is entirely new to HGO and calls for an encore. Joan Font, who returns to HGO and Rossini from the last season’s production of The Barber of Seville, proved a marvelous director with uncanny attention to visual satisfaction. There was not one thing out of place. The set and costumes, designed by Joan Guillén, finished the bouquet. Conductor Carlo Rizzi directed with animation and expression, though occasionally with a bit too much zeal, as the racing orchestra rushed past the singers at times.

As a merry tale of a woman who knows the power of her wiles, and the buffoons who fall under her spell, The Italian Girl in Algiers is naturally a funny plot. But HGO took it to the next level. Imagine a rainbow of colors akin to CandyLand and inventions from Willy Wonka’s factory, add outlandishly large or abundant objects, and finish with pure artistry.

Soprano Daniela Barcellona, singing the part of Isabella, embodied the confidently erotic part with an impressive range of bright high and low notes. As if channeling Queen Elizabeth, Barcellona reached the height of her singing inspiring an army of men to think of love, duty, and honor with the flag of Italy in one hand and a massive champagne bottle resting beneath the other. Lawrence Brownlee, signing the tenor part Lindoro, awed with his technical abilities, handling Rossini’s difficult passages with ease. But the unique timbre of his voice was out-done by the robust voice of Mustafà, sung by charismatic bass-baritone Patrick Carfizzi.

With lines like “Wow, what a woman” and “Do I look like a baboon to you?” this opera was made to be delightful. Here, HGO does more than deliver—it dazzles.

—SYDNEY
is a graduate student studying English literature and opera at Rice University.