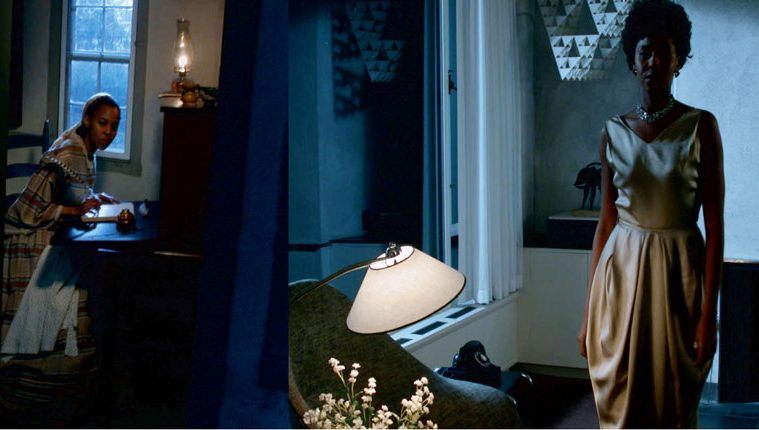 Review: There is no archive in which nothing gets lost

When nothing becomes something, things get interesting. Such is the situation in There is no archive in which nothing gets lost, a video exhibition curated by Sally Frater, a critic-in-residence at the Glassell School of Art and an A+C contributor. The show consists of three video works, installed in separate areas of the gallery, that portray black women in four different environments.

Artist Sonia Boyce and DJ and sound engineer Ain Bailey collaboratively created Oh Adelaide from found footage of a 1935 vaudeville show performance from the famous jazz singer Adelaide Hall. Responding to each other’s manipulation of the footage, Boyce and Bailey present an engaging and disturbing ethereal portrait of moving image and sound. Much of Hall’s image, as it halts and spurts, is blown out and replaced with bright white light, embodying a soundtrack of distorted, beast-like, melodic repetitions.

Lorna Simpson’s Corridor is a split screen of two videos portraying 13 minutes of two female lives taking place side by side but at least a century apart: one on the brink of the Civil War and the other at the beginning of the Civil Rights era. Both women drift through quiet domestic interiors, communicating in their own ways with an outside world and alluding to the social tensions and uncertainties of their times.

Cutting, by Wangechi Mutu, shows a woman, with a large knife in hand, approaching an object on the ground in a barren landscape – perhaps a log or section of a tree. She proceeds to hack forcefully at the object; though making very little noticeable physical progress, her cutting produces harsh, clanging, reverberating noises. Backlit by the setting sun, the woman walks away and up a small hill as the video ends with five progressively slower fade-to-black video cuts, similar to a blinking eyelid as it gets heavier and heavier.

Frater describes the exhibition as one that “seeks to examine notions of ‘place’ as explored through depictions of architecture, geographic locations, and memory.” She has carefully curated video works that require attention not to documented specifics, but to constructed memory and assumptions which we, in turn, respond to because of our relative places in and understandings of time, society, and culture.

Frater challenges the conduct of representation in There is no archive in which nothing gets lost. The exhibition’s strength lies in its own negation, in its depiction of the places where “nothing” takes on an identity of its own through its absence. It posits the impossibility of a story that does not draw attention to its missing parts.

–NANCY ZASTUDIL
Nancy Zastudil is an itinerant curator and freelance writer who can’t seem to stay away from Houston.