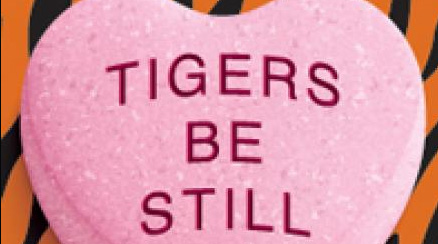 The four characters in Kim Rosenstock’s “Tigers Be Still” — Sherry (a teacher) Grace (her older sister) Joseph (Sherry’s boss) and Zack (Joseph’s teenage son) have experienced devastation to one degree or another. Grace’s fiancé left her, Sherry’s dad left her, Grace and her mother, Joseph lost his sweetheart and his wife, and Zack lost his mother in a car collision. All of them are bearing up as best they can. None of them have had a meltdown or explosion. Zack practices pointed passive-aggression at the drugstore where he works, and passes time at home in his mother’s shoe closet. Grace gets schnockered every day, while taking up residence on the sofa. Sherry, in a focused and valiant attempt to shake off the malaise, gets her degree in Art Therapy and finds a job teaching in middle school.

The tigers in Rosenstock’s thoughtful, odd comedy are both actual and metaphoric. The title works on several levels. It is an admonition, a plea and an observation. Like the hostile Indian attacks Joan Didion cited (in her famous essay, “On Self-Respect”) as a given in life, tigers can be silent, cunning, and thus completely unanticipated. The surprises in “Tigers Be Still” are important and maybe even strange, but not huge, or catastrophic. In a way all the characters, except maybe Sherry, are waiting for some kind of salvation, even if they’re not aware of it.

Sherry, herself, is an unlikely heroine. She’s warm, enthusiastic, deferential, smart, but she’s not imposing, the way we except heroines to be. She’s not bursting with energy like Punky Brewster or Mary Tyler Moore. She’s not meddling or interfering like Fanny Brice or Dolly Levi. And yet she has the acumen to provide key answers when the opportunity comes. When Zack points out she’s the only one clueless enough to tender a resume’ for a cashier’s job, we grasp that she may
be a bit too enthusiastic. And yet she’s the only one in the room who refuses to capitulate to adversity.

Rosenstock may have chosen Sherry because she’s the kind perky gal that sometimes makes us roll our eyes. Life hasn’t beaten the mickey out of her yet, and we don’t get it. The more you consider “Tigers Be Still” in retrospect, the more appreciation you have for its subtlety and ingenuity. I’m not altogether sure it carries the impact intended, yet the message that resolution and emancipation is there, without necessarily requiring Herculean acts of defiance is worth considering. The idea that we can face down our tigers with wisdom and intelligence instead of brute strength. The cast is exceptional (Abbey Siegworth, Christopher Sykes, Aleisha Force and Chamblee Ferguson) providing many moments of pleasant humor and poignant humanity.