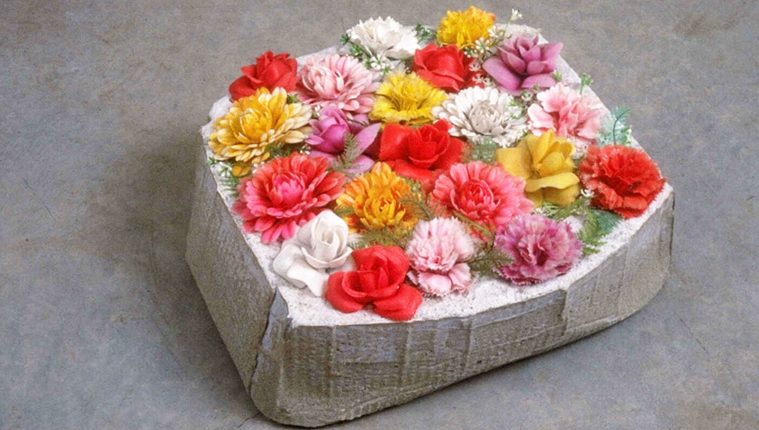 In 1987 Tony Feher had a revelatory experience: Chancing upon a collection of red marbles in a shop window, he was struck by their shininess, their combination of translucency and opacity, and their varying shades. For Feher, it gave him the sense that “anything was a possibility; no shard of anything was too humble or cheap to ignore.” It was a watershed moment and spurred Feher to stuff a five-inch-tall glass honey jar with multiple red marbles.

Walking into the central, double-height gallery, viewers are confronted by a classic Feher arrangement: a plinth resting on plastic crates covered with a variety of found objects. Take It Up with Tut (2008) was inspired by carpenters’ notations still visible on one of King Tut’s outer coffins.

Above it a glass jug, tilted just so and filled with bright blue Windex, hangs from a clothesline strung diagonally across the room, the excess rope casually pooling in the corner. For Feher, pigment is superfluous when prosaic Windex presents such pure color. In a similar vein, Feher laid out a flat surface in his studio to create Tut and allowed objects to pile up over time in what he terms a “non-judgmental way.”

Like the marbles, Feher finds the microcosm inside a bottle endlessly fascinating. He draws a line with water in Until Tomorrow (2003), a succession of bottles arranged on a shelf and filled with an undulating level of dyed water. With the installation of (pinks) from 2007, he maximizes the main boon of the renovation: a windowed entrance façade oriented towards the street and a staircase freed from the gallery space.

At the top of the staircase, a mobile of wire clothes hangers dances in a windowed corner. Suspended in the hangers’ various nooks are tiny water bottles filled with fuchsia liquid. From a distance, at the foot of the staircase or in the opposite gallery, the wire hangers disappear, as do the plastic water bottles, leaving a playful configuration of floating pink shapes.

The work in Blaffer’s main upstairs gallery – formerly bisected by a staircase, now a windowless cube – presents a more melancholy tone than the childlike wonder exhibited downstairs. Beginning with Le Roi de Baton, 1991, the works gathered here show Feher coming to terms with the AIDS crisis and mortality. (In 1989 Feher was diagnosed with a rare genetic disease. Its treatment involved blood transfusions, from which he contracted HIV.)

Despite this rumination on loss, Feher’s work as a whole is optimistic. From the generous embrace of everyday materials to a childlike fascination with the simple processes of stacking and hanging, he finds potential in the unlikeliest of places.