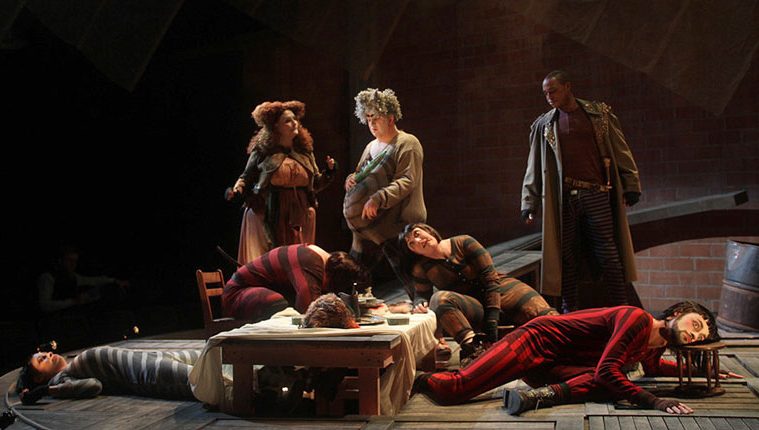 After a week of watching the powerful – as in Lance Armstrong – fall from grace, it seems timely that Alfred Jarry might make an appearance about now, this time in the form of the young actor Lorenz Lopez in Classical Theatre Company’s (CTC) production of Jarry’s Ubu Roi, a play that is rarely produced, (as far as I know, it has not been produced in Houston the past two decades).

When the world itself feels like a farce, it’s an excellent time to consider Jarry, one of the early practitioners of Theater of the Absurd. Living in a political climate where the Wall Street powerful continue to pillage without regulation, and football players have fake girlfriends, who here isn’t in the mood for a masterful, profane, absurd, and vulgar freak show?

Director Philip Hays has a field day with this material, giving the whole enterprise a dingy yet comical doom-and-gloom, reminiscent of the creepiness of the Quay Brothers or a Tim Burton movie. He’s done some handy work with the text, mixing in scenes and songs from Jarry’s other Ubu plays, adding some fresh material, as well as some having some fun in changing Jarry’s famous opening word “Merde” to “Shrit.” The frisky pace, with emphasis on large, awkward and precise movement choices, made for an added layer of vaudevillian comedy.

Portraying Jarry in his opening monologue, originally performed by the playwright himself, Lopez sets us up for “actor as puppet” proceedings to come. The young actor is terrific in the many parts he plays, from the kid who stamps his foot so we can see where we are, to the king’s scribe.

Vivid performances by Mark Roberts as the bloated Father Ubu and Susan Koozin as the weirdly voluptuous Mother Ubu amplified the cartoonish qualities, while a talented ensemble performed numerous roles with a zany zeal.

Ryan McGettigan’s set consists of a sweeping elevated platform, jury-rigged with trap doors of all sizes, allowing the cast to literally drop in and out of the picture. The concept creates a delicious metaphor for the world lurking beneath Ubu, the cesspool-basement of power, so to speak. The height of his wooden, precarious deck also places the action right up in our face. There’s no escaping this seedy lot: Ingenious details, from the trashed propeller at the base of the steps to the miniature hinged doors for the footlights, add to the production’s junkyard funkiness.

Macy Perrone dresses the denizens of planet Ubu to look like deranged prisoners, possibly recently-escaped. Again, it’s the whimsical flourishes that lend punch, such as a dirty toil bowl brush as a royal scepter, a bundt cake pan as chest armor, a Cyrillic character as a letter from Russia and toilet paper rolls as a substitute for everything from gold to an assault weapon to grenades. Eva LaPorte, as Queen Rosamund, sports a smashing black ruffled 17th century gown with some kind of dead furry thing on her head. These are simply inspired choices. Alex Jainchill’s garish and effective lighting makes the whole tribe look as if they have all recently recovered from a nasty bout of the plague.

Towards the end, the antics grow a bit tiresome, but that’s a small quibble for a well-realized, rarely-seen play in Houston. Bravo to CTC for taking the risk. The festivities concluded with a rousing and appropriately silly song on “debrainment”, a disturbing malaise that Jarry found lurking in 1896 and sadly, is still present today.