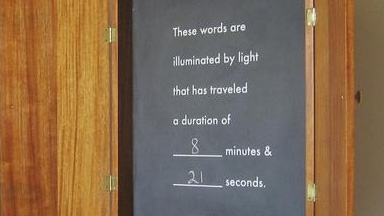 Review: Where Will We Live?

If Kafka and John Burger had a baby, thumb it would be New York-based artist Matthew Buckingham, whose work is full of pith and wit. An impenetrable bronze box states “May be opened after August 10, 3007;” a video projection of a Danish monument, to be shown until the projector lamp melts; a note describing a letter that reached its intended recipient, despite the fact it was dropped out a window and never mailed — such is the stuff of Buckingham’s survey exhibition “Where Will We Live?” on view (December 16, 2011–February 26, 2012) at the Glassell School of Art, and organized by Core Residency Program associate Director Mary LeClére and Yasufumi Nakamori, MFAH associate curator of photography.

One piece, a vinyl floor sign entitled “Narrative” (2000), reads “1.Undisturbed state 2. Disturbance 3. Struggle 4. Deadline 5. Disturbance Eliminated,” a list that may well describe a cinematic plot device, the mental process of an artist, or the seemly inherent compulsion of “civilized” man to upend and rebuild, even at the risk of everything that came before.

This propensity of man is echoed in other Buckingham works. “The Six Grandfathers, Paha Sapa, in the Year 502,0002 C.E.” (2001), a timeline text and a digitally altered photograph, tell us the story, both past and future, of the area we know as Mount Rushmore — undisturbed for millennium, sacred to the Sioux, wrenched away in broken treaty after broken treaty, carved but never finished, and despite all the strum und drang, ultimately destined to erode back to its original state.

My favorite is “Likeness” (2008). Here we have a cave-like enclosure, built of the detritus man no longer desires — storage crates, antique chairs bereft of seats, books whose titles have begun to fade — and within a video projection of a dog, a detail from Velasquez’s painting of the Infante Felipe Prospero. Narrated in Spanish, and dubbed in English, Buckingham’s poetic thoughts on portraiture remind us of the mesmerizing power of art.

“You make me stand in a certain place. You … make me listen, though I know you will never speak. …You look at me.”

— BETH SECOR
Beth Secor is an artist, writer, and educator. She also blogs for Glasstire, teaches at the University of Houston Downtown and Houston Community College Central and assists with Development at Art League Houston.