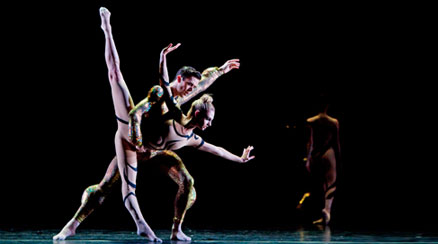 The lady dance-makers rocked the Wortham during Houston Ballet’s Women@Art, an evening of work by Julia Adam, Aszure Barton and Twyla Tharp.

Barton’s Angular Momentum proved to the big news of the night. Barton, a rising star with an original choreographic voice, has made her mark across a great swath of the ballet and contemporary world in record time. Talk about momentum!

Rich with her heavily idiosyncratic vocabulary where a simple plie splinters into sharp shards of movement, the ballet’s sheer density keeps our eyes glued to the stage. The company handled Barton’s delightfully bizarre movement with gumption, diving into both her angular broken lines and the more sinewy passages with confidence. Athletic powerhouses Melissa Hough and Connor Walsh are simply built for Barton’s ballet.  Angular Momentum makes one terrific match between choreographer and company.

Tharp’s masterwork, The Brahms-Haydn Variations, was the most classical offering of the night. With seven couples, Tharp’s ballet is a perfect vehicle to showcase the strength among the company’s principals and soloists. From Amy Fote and Simon Ball to Karina Gonzalez and Walsh, to newcomer Soo Youn Cho and James Gotesky, each couple exuded their own brand of chemistry. The stage does seem to brighten when Fote enters, though. It’s hard not to fixate on her mighty talents, knowing she retires in December.

Ketubah, Adam’s tribute to a Jewish wedding, added the evening’s solemn moments, and simply the best game of musical chairs in a ballet ever.

Hough and Ian Casady’s tender portrayal of the bride and groom gave the ballet its center, and music performed live by The Best Little Klezmer Band in Texas, its punch.