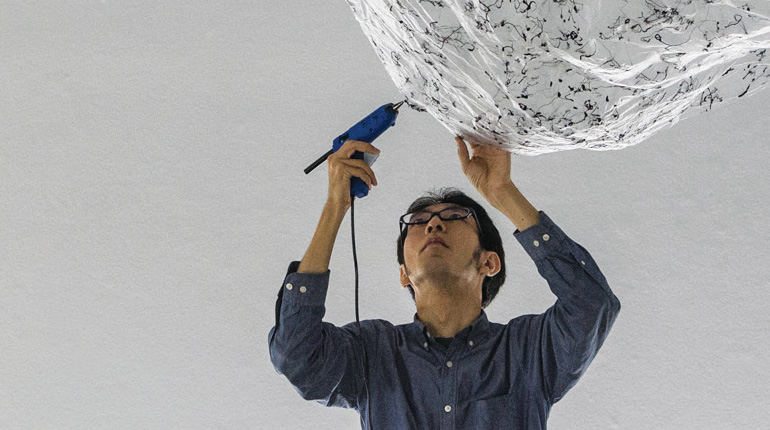 Nebulous Mountains hover in space. Yawning caverns glow supernaturally as they sway in the air. Yasuaki Onishi transformed Rice Gallery into a perplexing, organic space with Reverse of Volume RG.

The viewer first sees Reverse of Volume from the outside through the large Rice Gallery windows: a seeming terrarium for the glowing landscape within. Black spindles of a hairlike substance climb from the form, appearing as tangled vegetation before anchoring into the near invisible suspension above the work. The skeins of black threads create an atmospheric effect, much like rain or mist stuck in time.

Within the gallery space, the form is a clear and dominant force that implores the viewer to walk inside. The viewer enters a glacial cave peppered with black, tadpole-like spots lit from below with diffused light. From the inside, the once hazy structure appears falsely rigid. The craggy, luminous substance vaults from near-knee-height to high above the viewer. However, the structure delicately trembles with minor disturbances in the air. The form interacts just as sensitively with the light pouring in from the windows, revealing touches of green and reflected light from other viewers’ clothing.

Onishi shaped this form by creating an irregular ridge of cardboard boxes on scaffolding and laying plastic sheeting over the boxes. He then dripped black hot glue from the support on the ceiling down to the sheeting, anchoring the work. The artist can only drip the glue from an arm’s length at a time, requiring regular readjustment of the boxes and scaffolding. This incremental assembly takes a painstaking three weeks. Onishi cleared the boxes away after the glue had set, leaving only a loose mold of the boxes’ topography suspended by thousands of tiny filaments.

Onishi arrived at working in this fashion through his study of sculpture and casting. As he worked with the process, the artist found himself more interested in the mold than the cast object. Emphasizing the ephemeral and negative on a grand scale, Onishi departs from traditional cast-making techniques and arrives at a meditation on landscape, architecture, and sculpture.

Sometimes a means to an end is an end in itself.