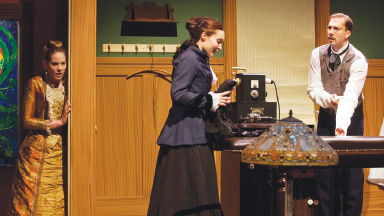 Review: “In the Next Room”

The first act brings the laughs in introducing us to Catherine Givings, wife of Dr. Givings, and Dr. Givings’ “therapeutic massage” device, used to treat women of their “hysteria.” Patients like Mrs. Daldry (Kristin Warren) come in weeping and melancholy, and leave in much better spirits. Much ado is made of Mrs. Daldry’s “healthy glow” when she leaves Dr. Givings’ office as it becomes increasingly apparent that no Victorian man has ever seen a post-coital woman before. However, the play turns to more serious matters as we explore the ins and outs of Catherine’s desire to connect with her daughter and her husband and her inability to do so, Mrs. Daldry’s repressed desires, and the deep sadness of Catherine’s wet nurse, Elizabeth (Courtney D. Jones), who recently lost her child. Much of the credit for the effectiveness of the play’s humor goes to Tracie Thomason’s impeccable comic timing and incredibly animated face. David Matranga is humorously wooden as Dr. Givings, who, while able to treat countless women for “hysteria,” does not seem to be able to recognize and treat his own wife’s increasing desperation.

The designers deserve kudos for the lush, beautiful environment, especially costumes; designer Claremarie Verheyen and her crew either found or built some of the most beautiful dresses in the city for this play. Houston has long enjoyed a love affair with Sarah Ruhl; most of us have seen all of her major plays performed here over the last several years to great acclaim. Stages’ “In the Next Room” is another Ruhl hit not to be missed.

— ZACHARY DOSS
Zachary Doss is a freelance writer. He has his BA in Creative Writing and Theater from the University of Houston.