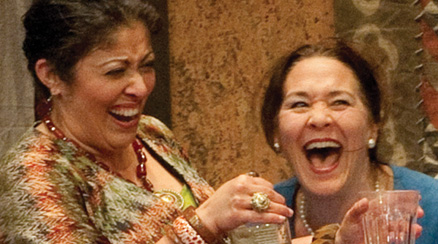 The cast of God of Carnage, now showing at the Kalita Humphreys Theater.

God of Carnage
Dallas Theater Center at the Kalita Humphreys Theater
May 11–June 17, 2012

Yasmina Reza’s God of Carnage (translated by Christopher Hampton) is spectacular in a strange way, we keep waiting for a meltdown, and it comes, but without catharsis. We’re primed to witness a colossal explosion, but it’s more like watching a dog fight. With money on the outcome. One little boy hits another with a stick, knocking out two teeth. The parents of the victim, Michael and Veronica, invite the parents of the aggressor, Alan and Annette, to their home, to reach an amicable reconciliation. They all agree that the motivation behind the crime is beside the point. But then, they drag us through 90 minutes of digression. If John Arnone’s amazing set, with its primitive African masks, weaves, and elementally salient reds hasn’t tipped us off, common sense suggests there’s little entertainment in harmony. The black humor that informs so much of God of Carnage is that the poor, deluded, participants think they’re too evolved to fall prey to their baser instincts. We are put in the queasy position of hoping that chaos will prevail.

The arguments in God of Carnage aren’t especially compelling or original, though the play (more or less) ends on a civilized note. Are we angels fighting demonic impulses or animals with delusions of grandeur? The characters in God of Carnage fail to comprehend that they might be both spiritual and mammalian. That humanity happens somewhere between the two. Another problem is the idea that truth has no place in polite discussion. The truth is a weapon, reserved exclusively for the moment when desperation has forced us. Hence, any attempts at genuine resolution are doomed to be superficial. Both couples begin with all good intentions, but unfortunate incidents and ill-timed divulgences steer the evening in a toxic direction. To Reza’s credit, no one is rewarded for their repugnant behavior, and one of the characters (maybe two) has an unexpected turn.

God of Carnage explores aggressive impulses with heaps of wry wit, and a few hints that it leans more towards satire. It’s unclear whether everything falls apart because the parents, deep down, feel ambivalent, or Reza thinks they have lofty pretensions. Which may be part of the problem. God of Carnage is excruciating and dynamic. It bristles with friction. But it mocks its characters for trying to handle a situation conscientiously, then pounces when they capitulate to bestiality. When Annette finally shrieks that at least her son is not a “sniveling little fag,” it’s not funny in the way a grotesque revelation might be. It’s horrendous. And appropriately, she weeps. There may be something very cynical about the way Reza manipulates us in God of Carnage. Or very sharp. Or both.