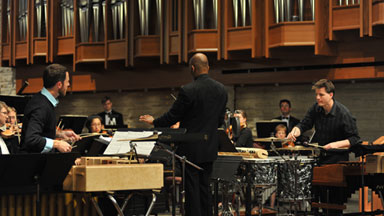 With the Houston premiere of the Concerto for Orchestra and TwoPercussionists by Jonathan Leshnoff as its centerpiece, the season finale for the River Oaks Chamber Orchestra (ROCO) lived up to the promise of its title and gave the orchestra an opportunity to go out with a “Big Bang”.

Percussionists Matt McClung and Todd Meehan made their jobs look remarkably easy as they navigated their separate, carefully organized batteries of percussion instruments with casual ease and grace and, in some instances, a touch of athleticism. The new work proved to be much less intimidating than its title might imply, with — among other things — a second movement that was especially lyrical and sonorous.  The duo offered a favorite prelude and fugue from J.S. Bach’s Well-Tempered Clavier as a delectable encore to their performance, which was also remarkable for its wide range of color, texture and sound.

Conductor Andre Raphel’s reserved and somewhat heavy-handed approach was perfectly suited for Beethoven’s Coriolan Overture which began the evening with drama and excitement but, less so for Ottorino Respighi’s Gli Ucceli and Felix Mendelssohn’s Symphony No.4 in A-Major. The strings of the orchestra labored their way through Respighi’s music in a way that paid a slightly robust, if not too brawny, homage to the delicacies of several great renaissance and baroque masters, including Jean-Philippe Rameau, whose La Poule figures prominently in Respighi’s arrangement. The ensemble’s reading of Mendelssohn’s “Italian” Symphony was on par with any performance I have heard and seemed to struggle in all of the usual ways. It often lacked motion and the orchestra’s crisp yet muscular articulation was more appropriate for the dark and stormy nature of Beethoven’s overture than for the light exuberance of Mendelssohn’s symphony.

As the River Oaks Chamber Orchestra begins to look towards its 10th Anniversary Season in 2015, the organization is no doubt looking back with delight and satisfaction at the tremendous growth, both artistic and financial, and innovation in programming that have elevated the ensemble to national attention. Having now firmly established themselves as an orchestra with something important to say, one hopes that the next few years will be devoted to elevating the ensemble’s technical and artistic prowess to a level that is more consistent with its savvy  programmatic vision.