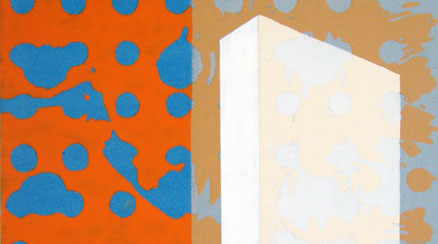 Robert Ruello: Open Other Side

Visiting Robert Ruello’s third solo exhibition at Inman Gallery, I was reminded of the term “abstract illusionism,” which critic Barbara Rose coined in the late 1960s to describe painters using trompe-l’oeuil devices to create spatial and other pictorial illusions in non-representational painting. After years of Clement Greenberg-decreed movements toward resolute flatness and “purity,” an impurification of abstract painting was underway.

I’m not sure if Ruello considers himself a latter-day abstract illusionist – he seems to prefer the more technical term “big fat liar” to describe his penchant for visual fake-outs – but it’s safe to say that Frank Stella’s dictum that “what you see is what you see” does not apply to Ruello’s Unknown Adventures in Unknown Spaces series. Dissatisfied with the responses he was getting to a previous body of work, Ruello launched the series as an experiment in reverse engineering. He wanted to see if he could build a painting backwards, he says.

Today’s abstract illusionists can perfect many of their tricks on their computers before applying paint to a physical surface, and that’s what Ruello does. He takes an image, reduces it to a two-tone bitmap and enlarges it into a grid that structures the overall composition, which he enlivens with various layered pictorial elements. Figure and ground get conflated within layers, and spaces seem to shift between two and three dimensions and back again.

Although the paintings are essentially transcriptions of the digital image onto canvas, Ruello isn’t painting them instead of printing just so he can charge more. The physical painting process is where some of the most important reversals occur as Ruello, an adept colorist, adds increasingly opaque layers instead of transparent ones; the final layer is gesso-white.

He also uses opaque gray color fields to create the illusion of transparent washes; mimics silkscreen graphics with hand-painted, glossy passages; and strategically uses matte paint to upend the usual push-pull dynamics. Material illusions are just as important to these paintings as the spatial ones.

Ruello showed three modestly scaled canvases from the series in Howard Sherman’s recent Artist’s Picks group show at Alliance Gallery, where they more than held their own amidst splashier, more monumental paintings by some of Ruello’s colleagues. Seen in larger numbers in a room of their own, where they’ve been installed with pitch-perfect sensitivity by proprietor Kerry Inman and director Patrick Reynolds, Ruello’s Unknown Spaces are well worth navigating, especially if you don’t mind getting lost along the way.

Robert Ruello: Open Other Side
Inman Gallery
April 5-May 11