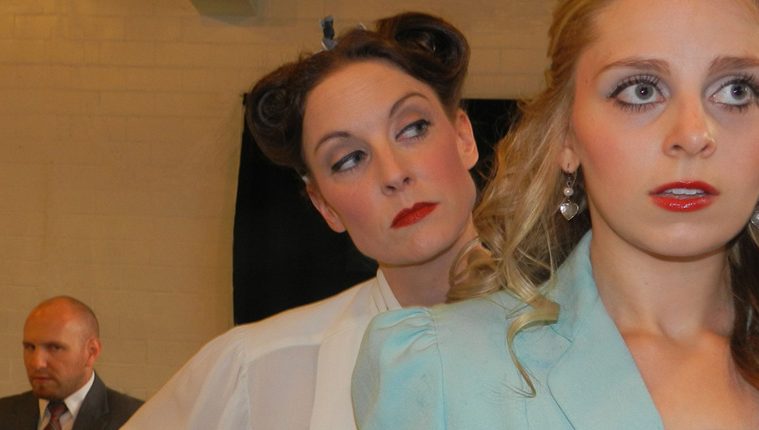 Sartre in the Summertime

Brandon Hobratschk, Meg Wozniak, and Betty Marie Muessig (L to R) are stuck together for all of eternity in Bit of a Stretch Theatre Co.'s production of Sartre's classic, No Exit. Photo by Emma Martinsen.

Bit of a Stretch Theatre Co. at 14 Pews

Houston opens its doors to returning college students every summer. Some don’t just want to hang around. Southwestern University (SU) students Emma Martinsen and Erin Cressy and New York University (NYU) student Wiley DeWeese, all HSPVA grads, started Bit of a Stretch Theatre Co. with a mission to perform small, rarely-performed “forgotten treasures” and new, unconventional pieces. The company opens their two-play season with Jean-Paul Sartre’s No Exit on June 21-26 at 14 Pews, followed by Michael John LaChiusa’s First Lady Suite, July 26 – August 5, at Studio 101. DeWeese spoke with A + C editor Nancy Wozny to bring us into the summer of Sartre.

A + C:  Sartre in the summer? Explain yourself.

WD: I think the summer is the perfect time for Sartre. As a philosophical, challenging piece, it’s on the opposite side of the spectrum from what you usually find theater companies doing during the summer. After a long day at the beach, pondering existentialism sounds like a lovely, contrasting evening to me!

A + C:  What do you see as relevant/curious/downright weird about working on an existential play written in 1944 in 2012?

WD: I actually think it’s a very timely piece for 2012. As a society, we’re defining ourselves more and more by the opinions of others and outside forces –just look at social networking. Sartre’s whole existentialist philosophy is based around the idea that real thinking comes from the individual. We’re employing original music to help highlight those themes within the play, and I think the effect is a theatrical experience that is the opposite of dated.

A + C:  Sartre at 14 Pews, now  that I can see. It’s a place to see something you might not expect, like a brand new theater company. How did you land there?

WD: Honestly, we just kind of stumbled across it. We came across the 14 Pews website, and, no exaggeration, immediately thought, “Hey, this would be a really awesome place to do a play!” Cressandra Thibodeaux, who runs 14 Pews, was completely game, and the rest is history.

A + C:  Well, you are living up to your name, Bit of a Stretch Theatre Co.. Tell us about the company. Is it a summer only venture?

WD: We try to live up to it! As a company, we believe in stretching ourselves and our audiences through the pieces we present. We’re really interested in the relationship between music and theater outside of a standard “book musical” context. That focus brings us to pieces that really make all involved think and feel things they aren’t used to experiencing in the theater; in a word, “stretching.” While we finish our studies, it is a summer company exclusively, but after school anything could happen.

A + C:  How is that one NYU student and two SU theater majors came together. HSPVA?

WD: Exactly! My fellow co-founders Erin Cressy and Emma Martinsen and I all were students in the same year at HSPVA, and through shared interests, we found ourselves doing student produced shows together. When we graduated, we wanted to keep collaborating, and thus Bit of a Stretch Theatre Co. was formed.

WD: I wish I could say that Erin, Emma and I are naturally gifted in theater company running, but really it’s been a huge learning process. We were really lucky to have a huge amount of supportive friends, colleagues, and family members who pooled their brains and talents with ours. That’s really how we were able to get this behemoth off the ground. Now, almost 2 years into running it, we’re still really beginners to the whole thing.

A + C:  I see that you are a HSPVA alum. Are you connecting with your former thespians for this production?

WD: We absolutely are. Both Betty Marie Muessig, who plays Estelle, and Jacob Perkel, who plays the Valet, are fellow PVAers. Its really awesome actually – the further we get into the Houston theatre scene, the more we find ourselves meeting and working with fellow alums. PVA is everywhere in the best way possible.

A + C:  Next up after the Sartre is First Lady Suite. Interesting choice. I’m not sure that it has ever been performed here in Houston. Do you know that to be true? Bring us into this boutique gem of a musical.

WD: I think Theatre Lab did it in the late 90’s, but it has since been significantly revised. Our production will be the Houston premiere of this snappy new version. The piece is really brilliant. In a series of 4 vignettes,  Michael John LaChiusa explores the lives and relationships of Jackie Kennedy, Mamie Eisenhower, Bess Truman, and Eleanor Roosevelt. It’s done in a very funny, quirky way, but really meditates on how we, as people, define ourselves when completely in the shadow of another person. In a way, you could say its dealing with some of the same themes as No Exit.

A + C:  Why should Houston audiences leave their air-conditioned summer dwellings to come out and see No Exit?

WD: Coming to see a show about people trapped in hell will make Houston weather seem ideal by comparison. Plus, I can honestly say that this is a show you won’t want to miss. It’s thought provoking, moving, and quite funny. And 14 Pews has a lovely air conditioning system.

WD: I would just highlight the fact that music really plays a large role in our production. The original score, which I wrote, is almost a character in itself in Emma’s concept of the show. I can’t really do it justice in word form, but needless to say we are very excited about it.