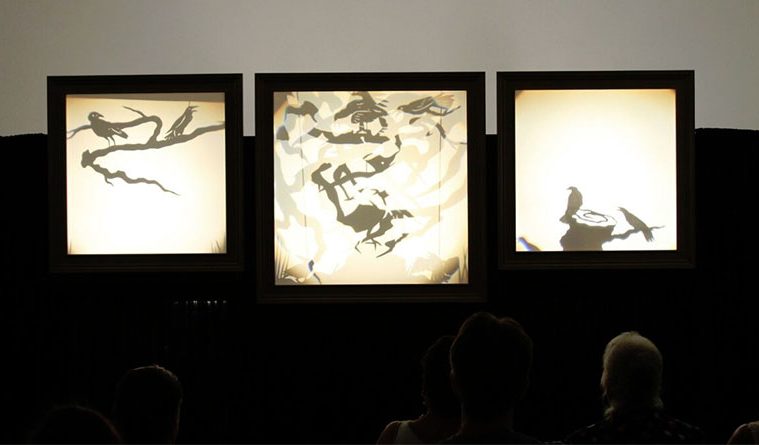 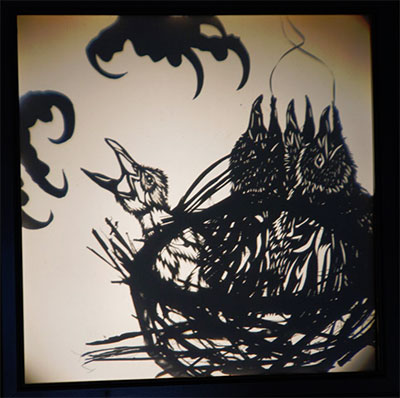 Life of White Raven,
tale told in light and shadow.
On three screens it flies.

Some time ago, a fellow arts writer and I, both pressed with deadlines, made an absurd wish for any working writer who wants her words published. We thought it might be nice if for the odd assignment or two our editor would actually cut a story’s word count down significantly, perhaps demanding a nice limerick length article, or maybe even a haiku 5/7/5 syllables-long column. We were joking of course, but after seeing BooTown’s latest shadow puppet show, White Raven (though Sept. 12), I now believe there are a few shows created where a haiku review would be absolutely appropriate.

Shadow puppetry is one of the most ancient forms of dramatic storytelling, and a kind of great grandparent of modern animation. Cutout figures, whether simple or extremely intricate–pieces of art in their own right–are placed between a light source and a screen, then manipulated to tell a story for the audience in front of that screen.

White bird becomes black
when depicted by shadow
Bird of light and dark.

For BooTown’s White Raven, creator and director Emily Hynds and puppeteers Mauricio Menjivar, Jade Young and Lindsay Burleson have indeed created stunningly intricate and beautiful cutout puppets to tell this story of a white raven, rejected by his mother and family. In the approximately 35 minute wordless show, we watch our underdog (underbird?), ejected from his nest as a chick, learn to fly by himself, escape predators and make his way in the world. During White Raven’s adventures, he moves to the big city, toys with taking up a religion and even tries life as a flying mammal.

White Raven’s story is told through a series of vignettes that mostly add up to an overarching narrative, but other times these short scenes seem to be self contained, almost a kind of visual haiku. Intermixed with these shadow puppetry short episodes are moments of recorded animation by David Merson Hess. During the animation series the white raven is illustrated as white, instead of shadow, before becoming other surprising forms that audience members will have to interpret for themselves. The show is not performed in silence, though, and Joe Wozny’s score sometimes more than the individual White Raven episodes themselves, helps to hold the piece together as one, whole narrative.

Music for ravens,
sounds filled with wonder and dread,
Melody of Flight.

In the end, the whole enterprise borders more on visual and musical art, than narrative theater. And I almost feel like prose and paragraphs don’t really work to capture and review White Raven. In this one strange and lovely (did I mention strange?) bird’s case, perhaps the best review possible would break down its ideas to their component syllables in a verse of 5/7/5.

White Raven soars on.
Are not we all misfit birds
trying to find home?