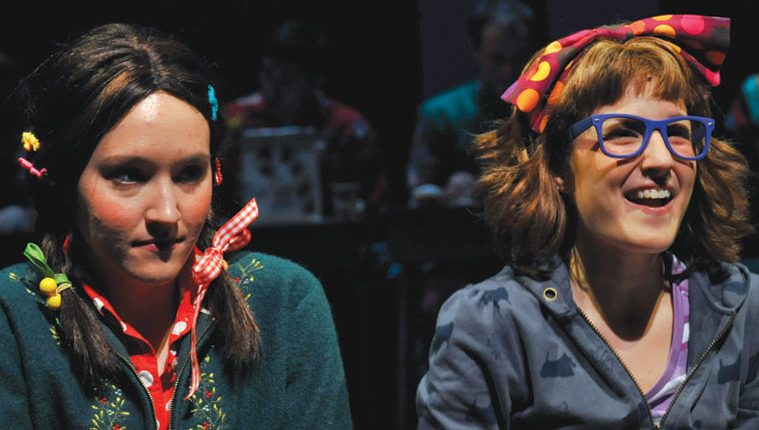 During the holiday season a lot of people dread the additional family time. It seems that every gathering is just one mislaid word away from an explosion and childish behavior tends to run rampant. But for sisters Mary McElree and Shelbie Mac all the silly quarrels happen onstage.

In Junie B. in Jingle Bells, cialis Batman Smells, and running through December 22 at Dallas Children’s Theater, treatment Mary McElree and Shelbie Mac play Junie B. and Blabbermouth May  — rivals in the first grade. This holiday tale teaches kids about acceptance and getting along — a lesson that comes easy to the sisters.

“We were very civil to each other,” 22-year-old Shelbie Mac says. “My parents taught us to always look out for each other.”

The girls grew up performing together. From acting out Les Miserables or Phantom of the Opera with their stuffed animals, to singing at Texas Rangers games along with older sister Kaylee, it seemed they were destined for the bright lights. But Mary figured it out much more quickly than Shelbie when she auditioned for Casa Mañana’s The Sound of Music at 11 years old.

“Mom had figured out I could sing,” 20-year-old Mary laughs. “I suppose I was belting something out in the bathroom and she decided I needed to audition.”

There was always music in the McElree house growing up, because their mother was a pianist and, in turn, each child took piano lessons. Something, like many other adults, they note they wish they would’ve continued into their adult lives. But both girls credit their parents with encouraging them to stay involved in the arts and audition for shows.

Growing up in Arlington, they were both active students at Creative Arts Theatre & School (CATS), taking classes and performing in plays. Being home-schooled allowed the girls a bit more freedom than other kids to focus on artistic areas they were most interested in, which for Mary was immediately theater. Although Shelbie followed her younger sister to the stage, she retained an interest in visual art — something in which she continues to dabble, apprenticing in the scenic design department at companies including WaterTower Theatre.

While both girls have spent time in New York City — Shelbie studied at Circle in the Square Conservatory and Mary spent last spring auditioning there after earning her Equity Card — both recognize the value in being valued.

“You go on a million auditions there and don’t even get called back,” Mary says. “When I moved back to Texas I was cast almost immediately… but I’d like to go back to NYC eventually.”

Although not identical, Shelbie and Mary’s crisp auburn hair and hazel eyes might be easy to mix up. This confusion was one of the reasons Michelle McElree changed her name to Shelbie Mac.

“We do so many of the same things, people were always getting us confused,” Shelbie says. “So when I had a teacher suggest I change my name — I did. And I’ve been Shelbie Mac ever since.”

Junie B. in Jingle Bells, Batman Smells is the first professional production that Shelbie and Mary have shared. And working with them has been a breeze for director Nancy Schaeffer who says she’s never seen two sisters who get along so well.

When asked over coffee one morning before a performance if they can come up with a time when they’ve bickered like their characters in Junie B., the girls pause and for the first time in the interview Mary is speechless.

“I can’t think of anything,” Shelbie says, remarking instead that she has a strong dose of older sister pride. “Sometimes when we’re on auditions together, I’ll overhear part of Mary’s and I’ll tear up a little because of how much she’s grown.”

And with a slight giggle and a misty-eye Mary returns the compliment. “We’re pretty lucky to share the stage.”

Catch the girls in Dallas Children’s Theater Junie B. in Jingle Bells, Batman Smells through December 22 at the Rosewood Center for Family Arts.