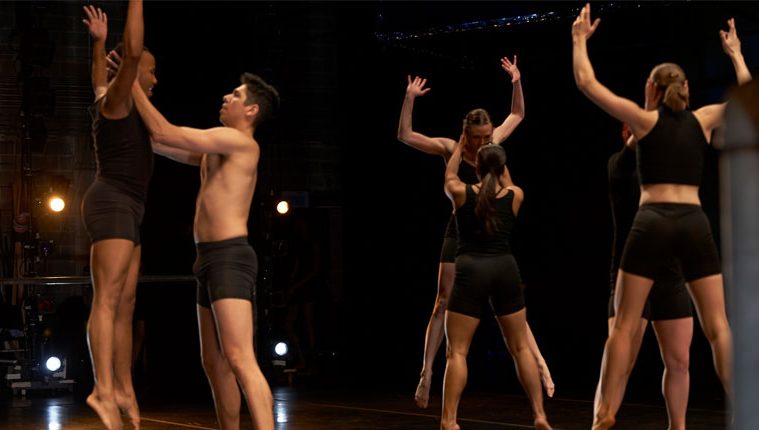 Its diverse dancers with their everyday bodies have never looked better as a group, each one dancing as if their life depended on it, fully committed and in the moment. The physical production of all three pieces is rivaled only by Big Sis next door, the Houston Ballet. Kris Phelps’ lighting design throughout mesmerizes with wondrous atmospheric effects and pin-spot perfection. Pam Buchanan’s costumes are always witty and to the point. Whoever is responsible for the impressionistic scenic design for the three works, unspecified in the program (a lapse that should not be repeated in future listings), deserves special mention. The Plexiglas box that encases the musicians at the beginning of Kiki Lucas’ The Vessel, the final dance of the evening, which flies away and then later descends at the end to enclose the principle couple, is striking. The look of the entire evening bespeaks thoughtful professionalism. Contemporary dance has never looked better nor performed with such abandoned control. However…

The three works they dance (Jason Parsons’ light before sound, Peter Chu’s Hidden in Plain Sight, and Kiki Lucas’ The Vessel) each with elements that contain their own individual theatrical power and dynamics, seem nebulous in overall conception. You’d be hard pressed to imagine the Parsons or the Chu pieces as being about sight from what we actually see the dancers do.

In a series of short, impressionistic scenes with their own blackouts after each movement, light is least successful on any count. Premiered in 2011 on the Met’s “15 on the 15th” program, the work limps by, a physical workout as the six dancers spend more time crawling across the stage than dancing on it. In fragmentary and broken movement, much of it in slo-mo, there are more hands on heads than hands over eyes. Set to an atmospheric electronic score with scratchy static and a propulsive heartbeat by Nathan Fake, Alva Noto, Glenn Branca, and Pan Sonic, nothing we see coalesces into a coherent concept. The dancers (Mia Angelini, Cythia Harada, Allie Knonick, Terrill Mitchell, Brit Wallis, and Lisa Wolff) crawl convincingly.

A work for the full company, Chu’s Hidden in Plain Sight is about celebrity, that’s the impression it makes with its references to facades, publicity hounds, and cocktail lounges. Apparently it’s set in Las Vegas, but you wouldn’t know that if it weren’t for preview publicity articles about the piece. It’s ambitious, for sure, and wildly danced with conviction. It’s also the most Broadway-like in movement as it slyly brings in steps that Peter Genarro or even Bob Fosse would recognize. Into this world vamps the diva, Kiki Lucas, surrounded by acolytes and groupies. As Met Dance’s reigning diva, Ms. Lucas is tailor-made for the role. Although she’s sheathed in a clingy, shimmery red gown that doesn’t particularly flatter, she’s the center of our attention. Catching the limelight with magnetic stage presence, she throws it back in our face. With her thick main of henna ringlets, she rivets our gaze. Who she’s supposed to be in the piece is a mystery, except some celebrity with demons, which is evidenced by a later extended solo where she undergoes a type of breakdown as she gyrates and vogues with increasing violence.

The soundtrack by Djeff is a neat sampling of ice cube tinkling, bar noise, coughing, a bit of Romberg’s “Softly, as in a Morning Sunrise,” a hint of Jacob Gade’s “Jealousy,” and lines of overheard dialogue interspersed with Jose Garcia Esquivel’s experimental, easy-listening lounge-scapes. What this woman in the red dress or the increasingly drunk bar flies have to do with the sense of hearing or sight went completely over my head. When the red carpet gets rolled out, we might as well be in Hollywood, not Vegas. In a lovely comic bit for the company, the dancers sit on the floor in front of low platforms they’ve dragged downstage and become dreamily more smashed, falling backward as they devour their drinks’ olives or the bar’s tapas.

Ms. Lucas takes the reins commandingly as choreographer for The Vessel, a Met Dance world premiere. It’s a feel-good piece about mentors and allowing “yourself to be lifted by the power that’s available,” as stated in the program notes. The work is lofty in conception, wonderfully scored for strings, percussion, and piano by Ben Doyle (played live, which is a big plus), but fuzzy in actual performance. Too much goes on, too many characters introduced without history. It looks great, with its underwater video projections (by Doyle), that startling and smart lighting by Phelps, and that plastic box into which all manner of meaning can be put. But you’re never sure what’s going on, or what it’s supposed to mean. If as Balanchine so wisely said, you can’t dance mother-in-law, it’s even more difficult to dance a concept without the whole thing going somewhat wobbly and indistinct.

Guest artist Bailey Flowers, a third-grader who’s hearing impaired, is led by the hand through ballet barres and among the dancers by Marlana Doyle, Met Dance’s artistic director. The muffled sound becomes clearer as the box rises on the musicians inside. During seven movements, with their aural titles like Canal, Incus, and Hammer, couples intertwine, roll on the floor, struggle with arms outreached, coil into the fetal position, grab at the air, put their hands over their ears. The work is sinewy and driven but without real intensity. It’s a journey but where are we? Max Jones and Lisa Wolff (with those never-ending legs) offer a hint in their continuing duet, but who are they? Parents, dream lovers, a future Bailey and her beau? There’s plenty here to love, and Ms Lucas moves her dancers with assurance and know-how, but too much remains unsaid (unheard?) for this work to truly satisfy. Along with all the dancers listed above, the piece included Christopher Cardenas, Patti Hogan, Kerry Jackson, and Noa Tumpkin.

They dance beautifully at Met Dance, a real company full of detailing and nuance. In May this lively family will move into a brand new home on Calumet. Along with the company’s encompassing heart, they’ll have an equally warm hearth. We wish them all the best.