Houston is home to numerous chamber music ensembles that have thrived alongside each other, carving out their own niches with unique visions of how to present music and connect with audiences. After a challenging pandemic year when there was little work for musicians and existing groups could not do what they normally do, what does the landscape look like now? In this series I caught up with musicians from nine distinctive ensembles in Houston to reflect on the past year and look to the future. In Part Two, I visited with Loop38, Apollo Chamber Players, and Carya String Quartet.

(Enjoy Part One and Part Three as well.)

A digital season was launched in July, 2020, a mere two months after the cancelled season finale that would have seen the premiere of composer Tim Holt’s work for the ensemble. Instead, Holt reconceptualized his entire piece for the digital platform to give the collective a memorable and meaningful work that perfectly suited the time and place.

True to its title, Anywhere/Everywhere: 38 Loops for Loop38, each loop was recorded by musicians in isolation in disparate locations, and the premiere was accessible to listeners literally anywhere and everywhere. Holt assembled over 100 individual recording files from the musicians and produced a 20-minute work set to visual imagery he had captured over his three years of living in Houston. The result is a minimalist soundscape of intriguing loops, and an oddly appropriate ode to our city with its parking structures and HVAC units, railroad tracks and iconic landmarks, grackles on wires and grackles darkening the sky, like choreographed musical notes in the air.

The success of that premiere, the first commissioned work by Loop38, was followed by other virtual concerts, including one filmed and recorded in the acoustic wonderland of the Silos on Sawyer.

Outdoor performances at First Congregational Church’s Music at the Meeting House series and Tunes on 10th in the Heights allowed Loop38 to continue engaging the community in a more tangible way. “Programming was something we had to consider a lot in presenting outdoor concerts,” says Mehrtens. “Shorter sets and a variety of instruments worked well to engage the audience.”

Earlier this year Loop38 was chosen by the Society for the Performing Arts (SPA) as a winner of the Houston Artist Commissioning Project. Their work with Mexican composer Gabriela Ortiz and the Houston Contemporary Dance Company will see fruition next fall.

Meanwhile, look in the digital sphere for Loop38’s season finale in May for a recap of all the season favorites.

2020 was supposed to see the completion of Apollo’s 20×2020 project, a bold initiative begun in 2014 to commission 20 new multicultural works by 2020. The project has raised the ensemble’s profile nationally and internationally, while cementing its unique place at the vanguard of globally-inspired programming here at home.

“Of course, we were disappointed by the cancellation of our spring premieres of the last two commissions,” says Matt Detrick, Founder, Artistic Director, and violinist of Apollo Chamber Players. “But looking back, we are really proud that we were able to complete the project in the calendar year 2020.”

Eve Beglarian’s We Will Sing One Song (20×2020 No. 19) premiered digitally in real time with musical contributions by Armenian duduk performer Arsen Petrosyan, recorded in Yerevan, Armenia, and Iranian-born percussionist Pejman Hadadi, recorded in Los Angeles. Jennifer Higdon’s In the Shadow of the Mountain (20×2020 No. 20), inspired by her Grammy-winning opera Cold Mountain and her childhood in Appalachia, capped off Apollo’s Virtual Festival 20/2020.

Between August and November 2020, Apollo created 20 episodes for its Virtual Festival 20×2020 that featured performances of all 20 commissioned works, collaborating with dancers from the Houston Ballet to add another artistic dimension to some of the pieces.

Detrick is also very proud of Apollo’s partnership with the Harris County Library System (HCPL). “When everything was locked down, we were able to live-stream shows from the library to help celebrate the 100th birthday of the library system.” The Centennial Jubilee digital concert this February also celebrated Black History Month with world premieres of works by composers Damien Sneed and Paul Cornish. As soon as the libraries are open to the public again, Apollo plans to embark on a Library Voyage, presenting programs at all 26 branches within the HCPL system. “A lot of these locations have never had a live music performance presentation before, Detrick points out. “This is an opportunity to build bridges. We have all this music commissioned from all over the world. We want to take it into diverse neighborhoods.”

Something really exciting is happening on May 6. Moonshot: The Remarkable Journey of Apollo Chamber Players, a documentary film that tells the story of Apollo, will receive its premiere at the MoonStruck Drive-In Cinema in Houston. With a soundtrack recorded by the ensemble, the feature-length film is produced by Jeffrey Mills of Documentary Alliance and made possible by a grant from the Mid-America Arts Alliance. 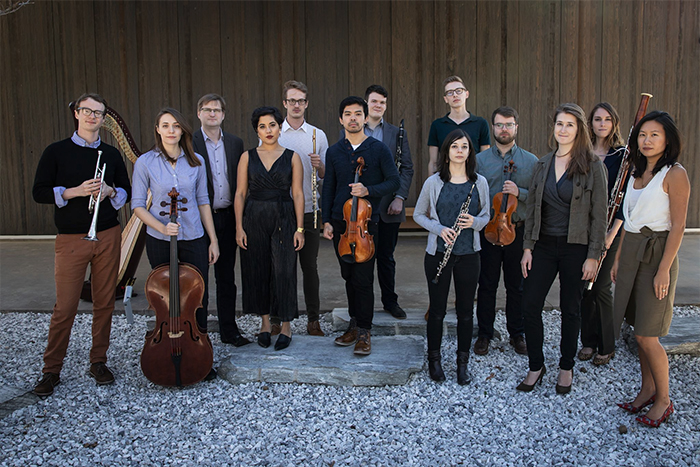 Loop38 musicians in front of the Menil Drawing Institute. Photo by Natalie Gaynor. 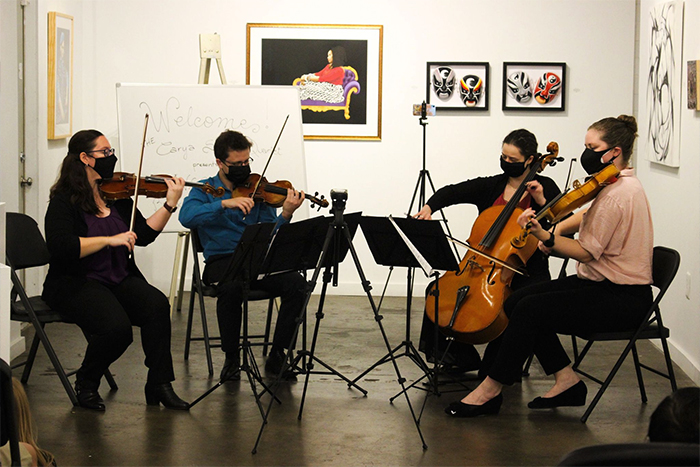 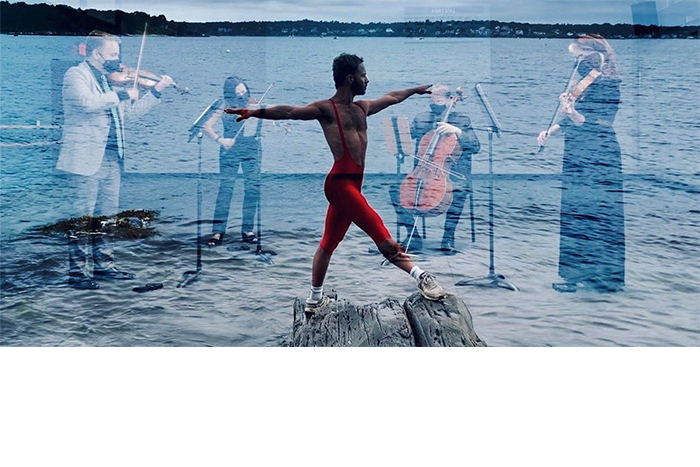 Founded in 2018, the musicians of Carya String Quartet, violinists Eugeniu Cheremoush and Laura Cividino, violist Rainey Weber, and cellist Sonya Matoussova, have all become a lot more comfortable with technology this past year. Weber even took a class on video editing to hone her skills. “Recording was really scary at first. It is something permanent. It’s not as easy as a live performance in many ways. You don’t have the immediate feedback from the audience. You don’t have that energy.”

“We were all isolated from each other for a long time,” says Weber. “Sonya was in Russia until last November.” They decided to do individual home recordings and piece things together afterwards. They found inspiration in Bach and art. “We have had a relationship with Archway Gallery since our founding,” continues Weber. “We really wanted to do a project that featured its artists.”

Bach was a natural choice. Musicians often turn to Bach to find their inner voice, and thus the Meditations on Bach series was born. “Bach is something that is in our practice as a quartet, to build our sound, our awareness, and to work on voicing.” Each short four-part chorale is a perfect gem of sublime beauty, enhanced by the detailed visualization of each paired artwork. The first video series of 14 Bach chorales, released daily between July 26 and August 8 of 2020, were a balm at a time of uncertainty and fear.

A second installment of Meditations on Bach was released between March 22-31, 2021, ten Bach chorales and ten works of art marking the passage of one year since the pandemic. Recognizing that mental health continues to be a struggle for many during the pandemic, the Meditations on Bach project has given many listeners a much-needed moment of peace. “We get feedback almost daily from people who just enjoyed having that little nugget of music and art in their life,” says Weber.

In 2021 Carya launched the Inspirations series, adapting some of their ideas for educational programs and interactive community concerts for live-streamed events from Archway Gallery. The first program focused on Black composers Samuel Coleridge-Taylor and Daniel Bernard Romaine, exploring sources of inspiration that informed their works. The second program looked at composers and their music through the lens of the social structures of their time. The third program, to be performed on May 16 at Archway Gallery, will focus on how composers have been influenced by parts of the world that are foreign to them.

Look for a new video in June, featuring music composed for Carya by six-year-old Apollo Premadasa. The video release, which also highlights the work of healthcare professionals throughout the pandemic, will be a fundraiser for organizations that directly support healthcare workers.