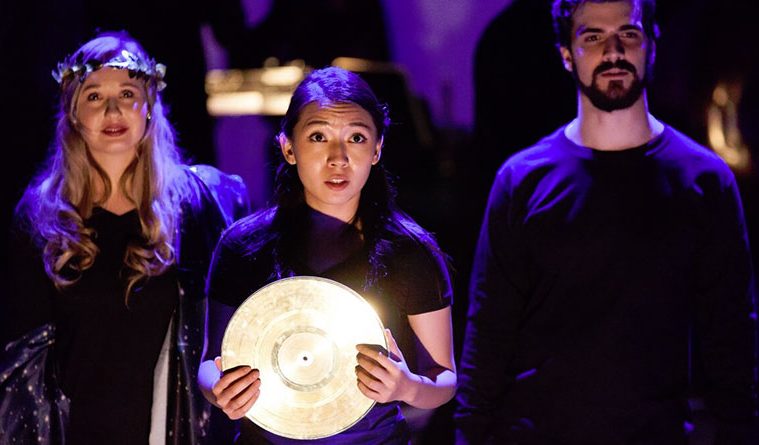 Song of Houston: Story of HGOco 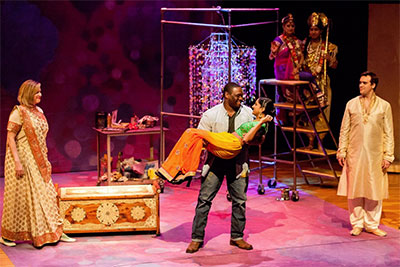 HGOco in River of Light.
Photo by Lynn Lane.

In the September world premiere of O Columbia, the new chamber opera from HGOco, a young Houston girl dreams of being an astronaut  journeying to the stars.  Becca uses her imagination to travel time and space, sailing with Sir Walter Raleigh to the New World and communicating with the orbiting space shuttle, but she soon learns the loss and tragedy that human exploration can bring when she hears the voices of the lost Roanoke Colony and listens to the last words from the Columbia before it disintegrates during reentry coming home from its 28th mission. In the end, after exploring other planets in a possible future when humans do travel to the stars, Becca realizes that the drive to explore and discover is the impetus of our greatest achievements.

Such is the message of hope from the first work of a brand new series of the groundbreaking “Song of Houston” project from HGOco, Houston Grand Opera’s initiative that brings opera to the community and Houston’s diverse communities to opera.

O Columbia, which was dedicated by composer Gregory Spears and librettist Royce Vavrek to HGOco founding director Sandra Bernhard, who passed away in June, also perhaps serves as a sign of both Bernhard’s legacy and the future for HGOco.

HGOco’s mission is to reach out to audiences of all ages, so for the 2015-2016 season they continue ongoing programs for kids like Opera to Go! with The Velveteen Rabbit, which tours through December, and the world premiere of The Puffed-Up Prima Donna, an opera for grades 2-8 about bullying, which tours from January to May in 2016. Also in the works for spring is a new chamber opera for middle and high school students with the working title The Emeline Project. The story is based on the real life of a black free woman in the 1840s who was kidnapped into slavery and sued for her freedom in the Houston courts.

For adults, the Song of Houston initiative continues to find new and innovative ways to tell the stories of the city’s multicultural communities. The Veterans’ Songbook project will have its first, free, full concert at Christ Church Cathedral on Nov. 8, after an informal showcase of some of the latest songs on Oct. 25 at the Wortham Center. The project began when HGOco partnered with veteran service organizations across Houston to create storytelling workshops. 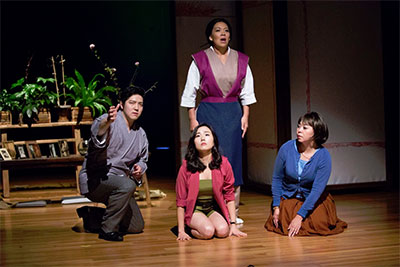 “It’s about self expression and sharing your personal story. We found that’s really powerful for veterans. Then we get local composers who are inspired by those words either oral or written, and they create songs that express those veterans’ stories,” explains Brittany Duncan, HGOco Programs Director.

The latest big project under the Song of Houston umbrella doesn’t have a definite name yet, though Duncan says it’s simply been called “Our City” by some. It does however have a definite mission. HGOco sent out a call to music schools and composers they knew for “stories that would resonate with contemporary life in Houston.”

By the end of the first round, they had 100 submissions, of which O Columbia was one. Another promising submission was the chamber opera by composer David Hanlon and librettist Stephanie Fleischmann about some of the massive storms that have hit the Gulf Coast. The Root of the Wind is Water will have its world premiere in May.

And how does “Our City” differ from previous Song of Houston projects, like the renowned East+West series that brought stories of Houston’s diverse Asian communities to the world?

Duncan explained that East + West was conceived as a four-year project and the Houston ethnic and cultural communities represented were carefully selected. In this new series the nature of Houston communities is not so defined. This project is “expanding the definition of the communities we’re looking at. It’s not ethnic based. It’s not culturally based. It’s broader than that.” 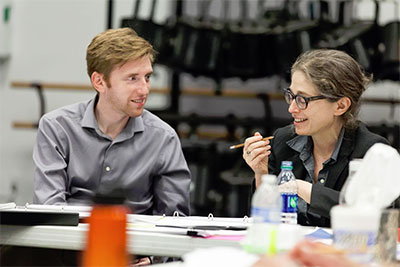 David Hanlon and Stephanie Fleischmann, creative team for the Spring 2016 HGOco Commission, The Root of the Wind is Water. Photo by Lynn Lane.

Both O Columbia and the coming The Root of the Wind illustrate that Song of Houston continues in its mission to tell the city’s stories, but these new chamber operas will also resonate with more universal themes and ideas. For O Columbia, “It’s about the space industry, but more than that it’s about people who explore. It’s about people who aspire to explore,” describes Duncan.

And for the upcoming Root of the Wind, the focus will be on Houston and Galveston, and the storms we know personally or through history like Ike, and the great 1900 hurricane that hit Galveston, but Duncan believes weathering a natural disaster is universal.

“One of the central questions we kept coming up with when we were doing the research is why do people build their homes in dangerous places, but people do that all over the country. Everyone understands this feeling of being rooted to a place and feeling a sense of connection to home and what it would take to get you to uproot yourself,” she says.

Loss and hope seem to be common to both works, and perhaps some of the veterans’ songs, so they might be the most appropriate selections for the first season without Bernhard. “Song of Houston was something that Sandra launched and believed in,” describes Duncan. “I think all of these projects and projects yet to be born will all be imprinted as part of that legacy. It was such a part of her and her influence was such a part of it. Anything we do going forward will have Sandra’s stamp on it.”