Sound, Fury and Bears: ‘The Winter’s Tale’ at the Alley 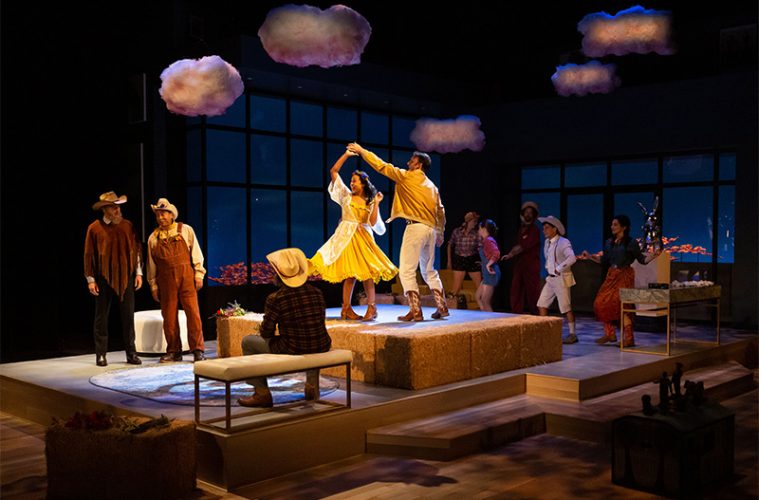 Even in a canon filled with political advising witches, fairy marriage wars and revenge seeking ghosts, Shakespeare’s The Winter’s Tale still stands–statuesque–as an odd chimera of a play.

One of the bard’s later tragicomic “problem” plays, filled with some of his well loved tropes like jealous husbands, star-crossed lovers and comic relief rogues, the story also contains bizarre elements all its own: a man-eating bear, a “magical” statue, and what should be a succession of big, satisfying emotional revelations and reunions that happen entirely offstage. 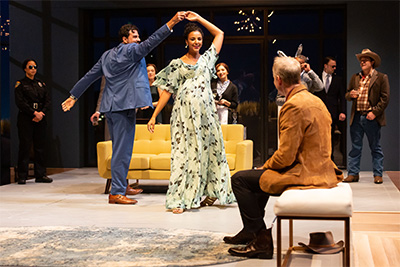 The Company in the Alley Theatre’s production of The Winter’s Tale by William Shakespeare.

In a new production at the Alley Theatre, artistic director Rob Melrose takes the quirky problems of this Winter’s Tale and runs with them in an original lone star direction that feels right and proper for the narrative. Melrose weaves this Tale as the invention of a child’s meandering imagination to create a story about the imperfect beauty of storytelling.

If you’re unfamiliar with this strange Winter, I won’t reveal too much, not to avoid spoilers, but because the show has so many branching plots, it would take a thousand words for a general synopsis. Just know there are two kings, Leontes of Sicilia (Elijah Alexander) and Polixenes of Bohemia (Chris Hutchison), who begin the story as friends until Leontes suspects his pregnant wife Hermione (Tiffany Rachelle Stewart) of going Bohemian behind his back. Later on, the action moves to the country and involves a lost princess, a nice family of shepherds, a dashing prince, rustic hijinks, and a soliloquy singing conman.

Perhaps in a bid to romance his new city and state, Melrose sets the play in Texas with Houston playing Sicilia as a sophisticated metropolitan and a kind of fairytale purple-sunsets lit Texas prairie playing Bohemia. 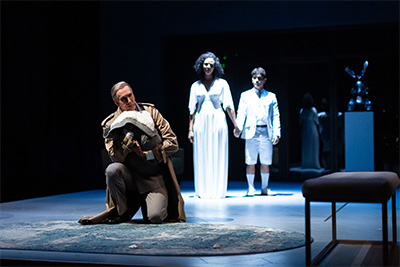 All the production designers make that Texas setting seem natural to the play, with some great comic touches. Newly appointed Alley director of design, Michael Locher’s contemporary high-rise set is one I want to move into, and Raquel Barreto’s costumes would tell a pretty witty and complex story on their own. A Koons silver Rabbit sculpture that never gets moved as the set changes from city to country and Polixenes and his lordly aid Camillo’s (Shawn Hamilton) dove hunting ensemble particularly amuse.

While Melrose making Winter a Texas tale certainly makes a splash, it is his framing of the story, with the aid of a character who probably has the least lines, that makes for a fascinating reimagining of the play. Early in the performance, young prince Mamilius (Juan Sebastián Cruz in sweet but bratty aplomb) promises his mother he’ll tell her a sad tale, best for winter, and under Melrose’s weaving that one line becomes the source for the tragedy, comedy and general chaotic weirdness that follows.

I might detect some meta-framing in this production as well, as the young prince enthusiastically playing with his chest of dolls/Shakespearian action figures, bares a  bit of a resemblance to an artistic director getting to play with his new resident company of actors. 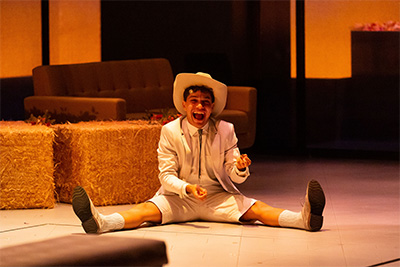 All of the Alley regulars get some meaty dramatic to comic and back again roles to chew on, and they seem to be having quite a lot of fun. But in any Winter’s Tale the biggest challenge goes to the actor playing King Leontes, whose personality changes on a dime as love becomes jealousy becomes raving paranoia within the span of two scenes, yet by the end, the narrative requires he be worthy of redemption.

Alley newcomer Alexander brings layers to the part making Leontes’s paranoia a product of real mental illness, not just a sporadic bout of evilness. There’s something of a political message here as well, as his advisors attempt to cajole or have a rational conversation with a mentally unstable ruler with absolute power.

But the performance revelation comes from Stewart, another new face at the Alley, for her portrayal of Hermione. Shakespeare loves a good woman wronged by slanders of infidelity (think Othello’s Desdemona or Much Ado About Nothing’s Hero) but in Stewart’s elegant hands Hermione intertwines the role’s traditional noble suffering with her own brand of quiet, queenly ferocity. Even in desperate grief, this queen has absolutely had enough of this nonsense and refuses to be gaslighted by a crazy, jealous tyrant of a husband. Her memorial statue should have been sculpted in steel.

The Winter’s Tale has never been as popular as Midsummer or Twelfth Night, but Melrose asks us to take another look and let our prince and princessly imaginations roam. No, the plot still doesn’t make a cowlick of sense, but when framed as a tale told by a child filled with sound, fury and bears, it signifies something, if only a bit of Texan wonder under a pink-clouded sky.