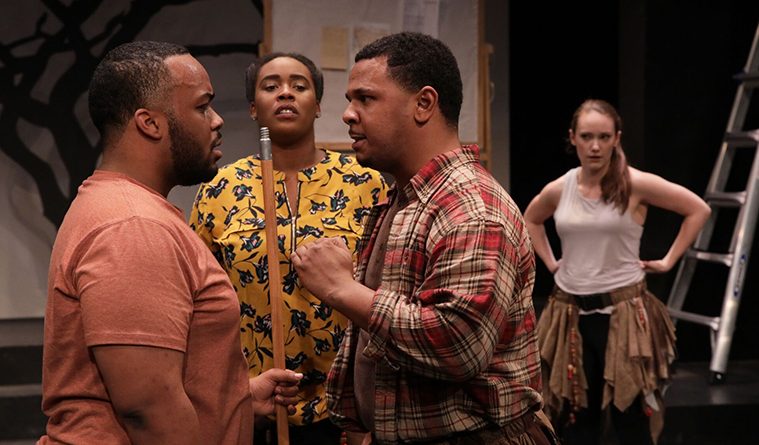 Stages delivers emotional blow with ‘We are Proud to Present a Presentation….’

Camryn Nunley, Michelle Elaine, Joseph “Joe P.” Palmore and LauraMenzie in Stages RepertoryTheatre’s production of We Are Proud to Present a Presentation About the Herero of Namibia, Formerly Known as South-West Africa From the German Sudwestafrika, Between the Years 1884-1915. Photos by Amitava Sarkar. 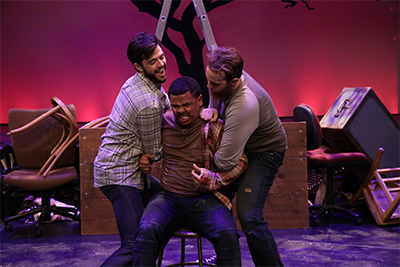 On rare occasion as a theater critic do I see a production that calls less for a review and more for a doctorate dissertation, but Jackie Sibblies Drury’s We Are Proud to Present a Presentation About the Herero of Namibia, Formerly Known as South-West Africa, From the German Sudwestafrika, Between the Years 1884-1915 at Stages Repertory Theatre (now through April 1) feels like such a play.

So let’s get the review out of the way. We Are Proud to Present is probably the funniest comedy I’ve seen this year while also at some point in its 100 minute production transforming into one of the most harrowing dramas I’ve witnessed on stage in some time.

On one level, We Are Proud to Present exists as a finely timed and disciplined (as directed by Alice M. Gatling) comedy about the sometimes loose process of collaborative theater-making. It opens as six enthusiastic actors arrive on stage to rehearse a presentation about the late 19th century/early 20th century history of Namibia. Or are they still rehearsing the introduction to an overview of the Presentation? Either way, our actors are ready to give it their improvisational all, while creatively cooperating on this mostly script-less–though they did consult Wikipedia–presentation process.

We soon learn from the introduction, (or is this powerpoint and poster board-illustrated section the overview?), that this particular European powers seizing of African resources led to what some historians consider to be the first genocide of the 20th century. Through land grabs, forced labor, starvation and later mass shootings, the German colonial regime caused the death of 80% of the Herero and 10,000 of the Nama people, two of the most powerful tribes of indigenous Namibians.

Rather bizarrely, but again very intentionally on Drury’s part, and under Gatling’s fine direction, much of the comedy of this very much scripted play comes from the question of whether an acting collective can somehow depict such atrocities as theater and use their artistry for good, or, at the very least, to educate. Of course, their camaraderie goes wrong very quickly, first as choice comic bickering and then as something much more horrific. 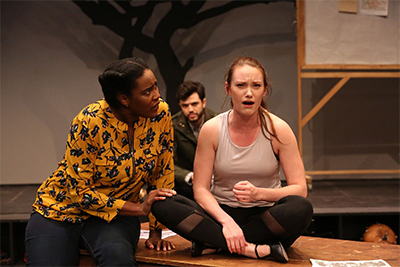 Labeled by number (Actor 1-6) in the program, the actors playing actors never call each other by any character name during this “rehearsal,” instead refer to themselves by other labels onstage: Black Man ( Joseph Palmore), White Man (Chasen Parker) and Black Woman (Michelle Elaine). When we think it can’t get anymore demeaning yet cruelly funny we still have Another Black Man (Camryn Nunley) and Another White Man (Aaron Ruiz) to meet. Both find themselves consigned to other man parts, a.k.a character roles. Actor 5 (Laura Menzie) does not play White Woman but rather all white women and all called Sarah because the names of the individual Herero and Nama peoples have been lost to history, and they can’t pronounce the Germans names. So Sarah it is.

Singling out any one of the excellent cast might reveal too much of the story. But I will note that while Palmore has proved himself one of Houston’s finest youngish actors on many a local theater stage, including Stages’, I’d also argue that he gives the very best WTF?! face in the city, elevating the expression from mere confusion at the current circumstances to a kind of bewildered fury directed at humanity, the gods and universe as a whole.

Parker somehow makes the good looking white guy, and the one actor not comfortable with improv, the most emotionally breakable of the troop even while playing a monster. Nunley, Menzie and Ruiz manage to make their actors playing actors playing stock man and woman roles into layered, flawed yet vulnerable young people in over their heads, going from naivety to petty to brutal to silly in the course of a scene within a scene.

Elaine as Actor 6/Black Woman also excels as the director/story originator of this Presentation. She gives the role an eagerness and basic goodness, making it all the more shocking when she exerts such iron control of the proceedings it sets them off into psychological territories and terrors unknown.

From comedy to tragedy with no intermission, We Are Proud to Present does in fact educate. I’d guess many audience members had never heard of the Herero and perhaps not even current day Namibia. But as the troop argue about how best and who has the right to tell the Herero story, they manage, with the best of intentions, to co-opt other people’s histories making them metaphors for American sins and tribulations. While the play never decries art’s ability to illuminate and give voice and story to those erased by violence and evil, it perhaps does serve as commentary on American arrogance that makes everything all about us, including other people’s crimes and tragedies.

We Are Proud to Present presents enough questions on an intellectual level to keep our minds searching for answers, perhaps working on that dissertation proposal for days after, but it’s the emotional blow that we’ll likely feel for much longer.