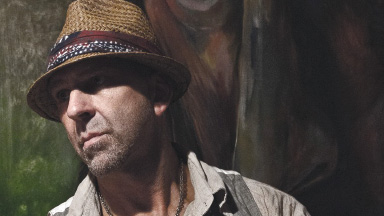 Staring at the World

They say art is an expression of life and for artist Rolando Diaz, sick this proves to be true. While growing up in Havana, Cuba, Rolando developed a love for art and painting which has carried over into his current work. Everything he sees, feels, touches, smells and hears, in one way or another, become part of the images expressed on his canvas.

Having traveled extensively over the past 20 years to such varied destinations as Africa, Brazil, France, Switzerland and Haiti, the Dallas-based painter has been influenced by many cultures. His December exhibit at Janette Kennedy Gallery, “Stare,” explores the lives of vagabonds. But first, he’ll extend his talents again to charity with a painting/musical event, Euphoria Live, on November 10 at Southside on Lamar.

A+C contributor Courtney Edwards caught up with the always-busy Diaz at his downtown Dallas studio.

A+C: How long have you been an artist?

ROLANDO DIAZ: I began my career by sending a personal letter to arts patron, Nancy Hammond. She put me in contact with Murray Smithers, a recognized arts voice in Dallas who liked my talent and told me to continue painting. I then looked for representation and was featured at the former LA Thompson Gallery on McKinney Avenue, which was owned by arts patron Ann Thompson. Twenty years later, I have had the privilege to feature my art in the Grace Cultural Museum of Art in Abilene, The Pace Collection, and the Florence Art Gallery as well as in the private homes of such superstars as Liza Minnelli, BJ Thomas and Dallas Maverick Dirk Nowitzki, to name a few.

Tell me more about how art is an expression of life?

Art influences culture, society, musicians, writers, poets, theater and film makers. I apply life to my paintings as well life experiences. My current show called “Stare” features paintings of looking into someone’s eyes and seeing their unique or rough life story staring back at you. Most of my inspiration stems from volunteering at the local soup kitchen to visiting with the homeless on the street. I met a homeless, but extremely educated man named Richard Johnson. I checked him into a rehab and helped him get his life back on track. He unfortunately fell back into his old ways and ended up losing both legs and passing away. I used his inspiration to create my current collection.

Do you have a favorite medium you like to work?

Painting is number one and sculpting number two. I embrace line and color in my paintings and work to maximize color bringing visual excitement to my pieces. I am in the process of a possible sculpture garden project.

How do you incorporate art with your philanthropic mission?

Euphoria Live, which began nine years ago, was the door that opened my eyes to being able to paint and raise money at the same time. I participated in a charity event in Abilene, where I saw the art and music combination play out. I returned to Dallas where I met pianist, Seth Simmons, whom I collaborated with to create Euphoria Live. Euphoria Live incorporates Seth playing an original composition while I paint a colorful masterpiece which is then auctioned off that night to the highest bidder with the money going to a particular charity. Our studio/theater located in Southside Lamar was created with the help of Southside of Lamar owner, Jack Matthews.

What sets you apart?

With nine years of live performance experience, my confidence in approaching a canvas in front of the audience has really made me who I am today. When you paint live, you are painting just like you are in the studio. I use the same brush work, approach the canvas same way, use oils and paint wet on wet which helps unify the undertones of my work. It takes me about 1 hour and 15 minutes to put together a piece. I follow the sound of the music which inspires me to just paint.

Who would you consider an influential person behind your artistry?

Where are some of your favorite places to gain inspiration and creativity?

My inspiration comes from everyday life and nature. I like to visit White Rock Lake and the Rolex Building off Cedar Springs to gain my inspiration as well as through fashion and photography. I also enjoy the Kimbell Museum, The Modern, the Peters Gallery and am looking forward to seeing the Dallas Museum of Art’s upcoming Jean Paul Gaultier exhibit.

If you could describe your artistry in three words what would they be?