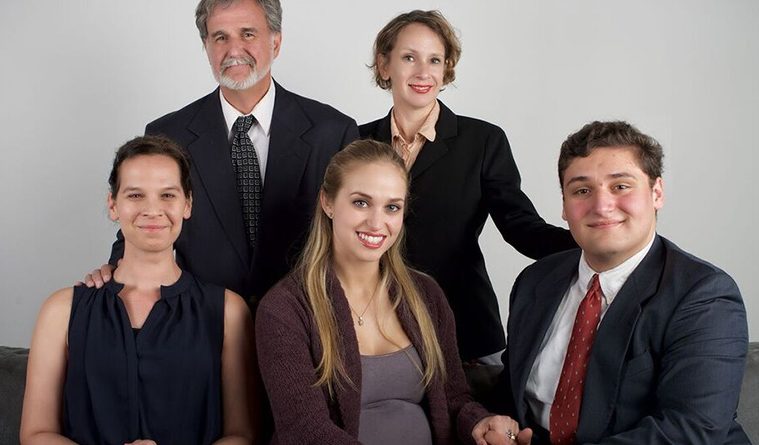 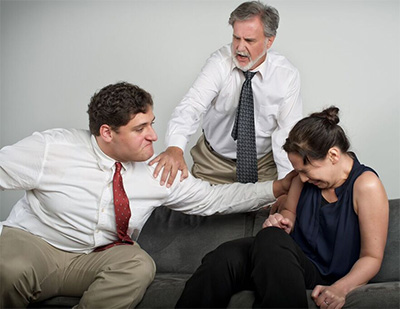 Gabe Regojo, Sam Stengler and Ruth McCleskey in The Baby.

Dianne K. Webb has done every job in the theater world (aside from lighting, she says), and the idea of grassroots informs everything she does. Tayyba Kanwal is a creative writer with a business background that she wants to put to better use in the arts world. The two of them share a passion for raw storytelling and a belief in art that asks questions. They are the co-directors of Next Iteration, one of Houston’s newest theater companies, through which they want to bring “living, breathing, thought-provoking theater” to the city. In a place that can feel very top-down, they are trying to build something from the ground up. Their first production, the world premiere of Lisa Omlie’s The Baby, runs March 10-19 at the MATCH.

Webb, NITC’s artistic director, had the play in her back pocket long before she founded the company in November of 2014: she met playwright Lisa Omlie earlier that year, read The Baby, and instantly knew she wanted to produce it. Holding on to Omlie’s play felt like sitting in front of a feast she wouldn’t be eating for months, but Webb and managing director Kanwal decided to kick off their new company with something a little more ambitious than a play: they hosted Readfest, a three-day play-reading festival spanning six Houston theater companies. Their goal was to make theater accessible to the public, to introduce a new audience to Houston’s diverse small theater scene, and to build a sense of community and cooperation. Held in October of last year at the brand new Midtown Arts and Theater Center Houston (MATCH), a space that presents collaboration and community-building as a cornerstone of its own mission, the ReadFest was a success: along with the Ensemble, Black Lab, Hune, Landing, and Wordsmyth companies, NITC surprised audiences with the rawness and intimacy of staged readings.

NITC plans to host the ReadFest annually, free to the public; they want to keep putting in the work to build an audience, not just for themselves, but also for small theater in general. In the meantime, the company is finally gearing up for their first full production. 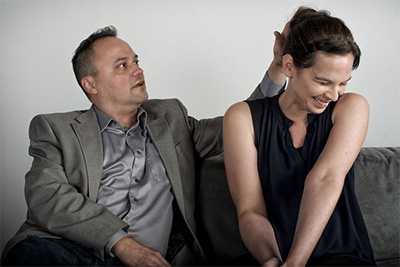 Rhett Martinez as José and Ruth McCleskey as Molly Mulroney in the world premiere of Lisa Boss Omlie’s The Baby  produced by Next Iteration Theater Company.

Webb would not give anything away about Lisa Omlie’s play, but expect a glance into the private life of a family grappling with personal tragedy and an election scandal concerning their adopted son. Expect to reexamine beliefs you thought well established. Expect to find yourself in the shoes of characters you wouldn’t have expected to empathize with. But something you should not expect? Straight answers. “I’m not interested in tidy stories,” says Webb. “What I’m interested in is the questions.”

The Baby promises to be an experience that sticks with you. It’s the kind of play that conjures up words such as “risky” and “controversial.” And Webb is not a director who shies away from that. “Life, being human, is rife with controversy,” she says. “Internal controversy, and external controversy. Implicit and explicit. Between us, and inside me.” But she never picks a play or makes an artistic choice for the sake of controversy or shock value. Her theater is not issues theater. “We don’t want to put an issue in front of you and lead you to the answer we think you should have.” Kanwal takes it a step further: “Controversy implies disagreement with a given answer, but if what we’re doing is asking questions, then controversy as a concept, controversial as a descriptor, becomes irrelevant.”

Webb doesn’t think of the lack of answers, the potential of audience members leaving with a sense of discomfort and a lack of closure, as risky. It might be, if audiences were reluctant to rise to the challenge, but the directors of NITC have more faith in theatergoers than that. “I think we want it,” she says, referring to content that is untidy, that requires a good bit of emotional and intellectual work to unpack. “I think we’re hungry for it, we’re craving it.” After a pause she adds, “What’s risky for me is this: it’s not polite. It’s naming the elephant in the room. It’s saying that under that smile, there might be something more.”

Opening doors, putting the cards on the table, these are Webb’s goals for The Baby as well as for NITC’s upcoming Intercultural Play Reading Series (May 2016). Webb will direct three staged readings; among them will be The Who And The What by Pakistani-American playwright Ayad Akhtar. It promises to be as engaging and thought-provoking as NITC’s other projects. “What Akhtar did was he took the lid off something that we think is in a tidy package, and said, ‘Do you think maybe we can look at it?’” And that, Webb says, is exactly the point of theater. Do you think maybe we can look at it?