Texas Lens: The Most Important Work We Do—Scenes from I Am My Future 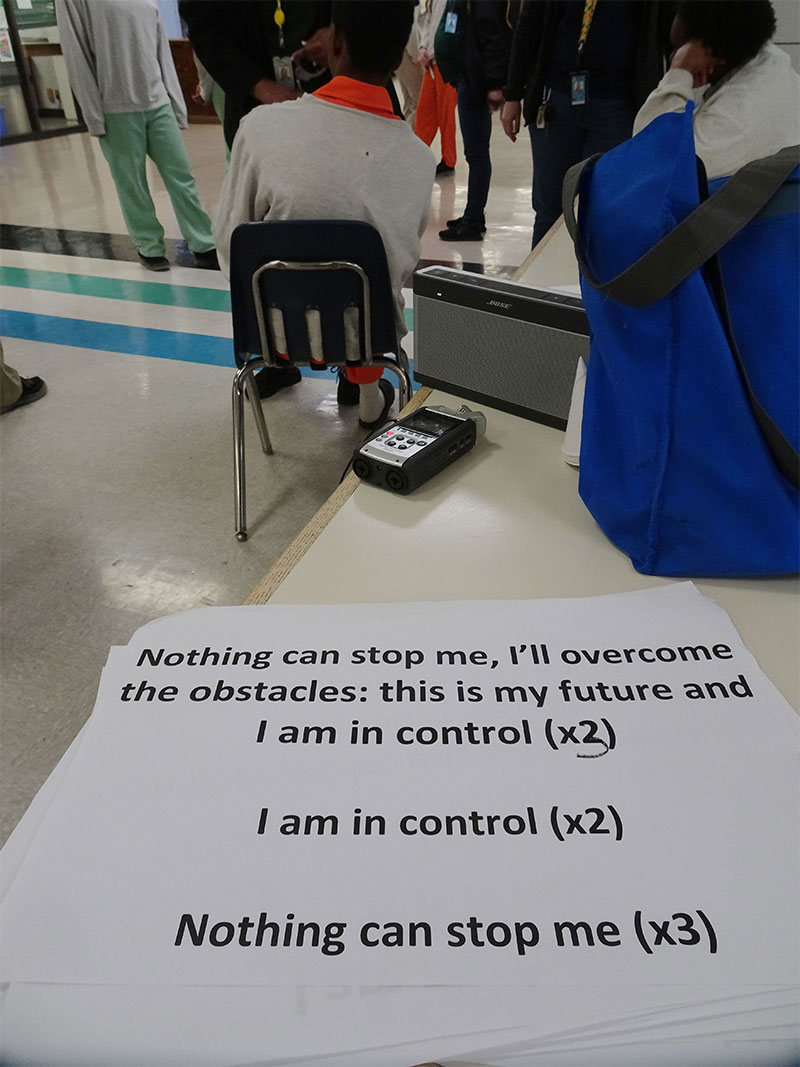 The lyrics for the final chorus of "I Am My Future" are seen during a rehearsal.

Sometimes the most meaningful musical experience transpires in the most unexpected place. On a late April afternoon, in the cafeteria of the Harris County Youth Village (HCYV), a facility administered by the Harris County Juvenile Probation Department (HCJPD) in Seabrook, TX, a hip-hop opera was given its world premiere by 12 resident teenage girls, led by HGOco teaching artist Julia Fox and a back-up band consisting of five Da Camera young artists (YA). The girls gave voice to their own words, “I Am My Future.” The music was composed by Da Camera YA Theo Chandler, who artfully assembled all the girls’ musical ideas into a rhythmically fun, accessibly tuneful, structurally coherent, yet emotionally intense piece of work. 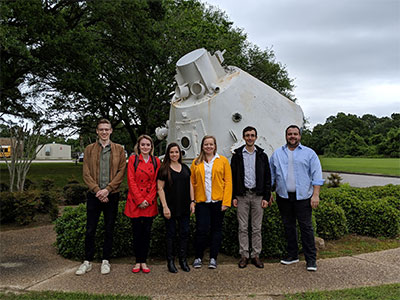 Six months ago, Brandon Bell, Director of Education and Artistic Administrator at Da Camera, invited me to tag along on this extraordinary journey, a 15-week collaborative residency piloted by HGOco and Da Camera, in partnership with the GIFT Program (Girls Inspiring Future Triumphs) at the HCYV. The funding, distributed among 7 arts organizations in the Houston Theater District and aimed directly at implementing arts programs within various facilities in the HCJPD system, came from then Judge Ed Emmett’s office.

I knew I needed to tell this story, wanted to do it justice. No one knew what to expect. A pilot program is just that—you plunge in without knowing what direction the currents might take you and what might happen along the way. I would not be able to tell the whole story; the strict rules of engagement with the population in the HCJPD system are there to protect these girls. Many of the girls had been trafficked, and all meet with a therapist twice a week. The intention is not to delve into their past, or follow up on their lives. I was simply an observer, privileged to follow their journey of creating an opera that envisioned their own future with the help of devoted teaching artists.

Bell put together the Da Camera YA team for this project. Instead of a more traditional string quartet, he intentionally built a “poppy” ensemble, something which the girls could easily relate to. The group consisted of composer Theo Chandler on keyboard, Brady Spitz on drums, Austin Lewellen on bass, Ellie Parker on saxophone, and Madison Vest on violin. HGOco soprano and teaching artist Julia Fox, who happens to be a former YA, completed the team. More than the instrumentation, it was the musicians’ desire for social engagement, their unique personalities, and their collective strength of character that cemented the success of this long-term residency.

Violinist Madison Vest relished in the 6:30 am morning drives to Seabrook every Friday. The sheer effort of getting there, going through the security check, dragging all their instruments and equipment through the hallways, up the stairs, and into the classroom, symbolized how much they wanted to give. When she played a plaintive violin solo at the end of a session, all the girls focused on her, some with hands over their hearts, appreciating the sheer beauty of her sound. Ellie Parker’s joy was infectious, and the girls were fascinated by her British accent. They loved it when Brady Spitz got out from behind his drum set to sing with them. They found great rapport with Austin Lewellen, tall and cool on the bass. After all, these young artists were not much older than them. The girls respected them, smiled and laughed and sang with them. 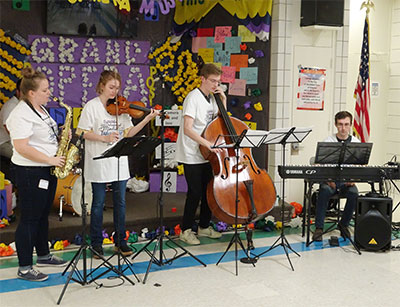 Theo Chandler, the cerebral and thoughtful composer, let go of his usual process of knowing the end before writing the beginning, worked with the girls through trial and error to arrive at the melodies, harmonies, and rhythms. The writing process was deconstructed so each step could be a discrete activity that might lead to the next step. An icebreaker game with Steve Reich’s Clapping Music turned into the rhythmic motif of the opening and closing chorus, “I am my future, this is me.” It’s an earworm Mr. Reich would be proud of.

Julia Fox, calm and centered in any storm, steered the ship with determination. I watched her work her magic in the last rehearsal. The girls were getting increasingly confused and frustrated while creating the choreography to one of the songs. Everyone had different ideas and no one was listening. Julia did not step in right away but let the noise level rise to the point where the girls realized they needed help. With a clear and calm voice she addressed them. “This amount of confusion is frustrating. It’s because you all care. We are going to work together. I know we have lots of ideas, and we will find room for all of it.” With that they all quietly listened to the music and began again, walking toward the audience with their arms crossed, then breaking the chain together in one motion. “I’m gonna break the chain. Won’t let this happen again. Accept my happiness now. Admit the strength within me.”

Before the start of this residency, Alisa Magallon, education manager at HGOco, asked the administrators at the Youth Village, “What can we do to help?” HGOco conducted 19 residencies this year in various school settings, but this is the first time they have worked in a detention/rehabilitation facility. She recalled the commitment of the staff in those first logistical meetings: “The facility administrator, the principal, the teachers, the therapists–everyone contributed to the conversation. They really cared. They wanted the girls to have the opportunity to express themselves.”

Can healing be as simple as making a song together and getting up to perform it for each other? In the end, every single word in the opera came from the girls. Everything they sang is about them. They are the creators and owners. If art is a product of vulnerability, then there is no better example to illustrate that point. “We are nervous about being this vulnerable with you all,” said teaching artist Julia Fox before the performance. The lyrics are heartrending: “All you do is tell me lies…I wanna numb this pain away…I feel my warm heart turn to clay.” These words came from a session where the girls spoke about cold-heartedness coming from betrayal, from others being cold-hearted toward them. 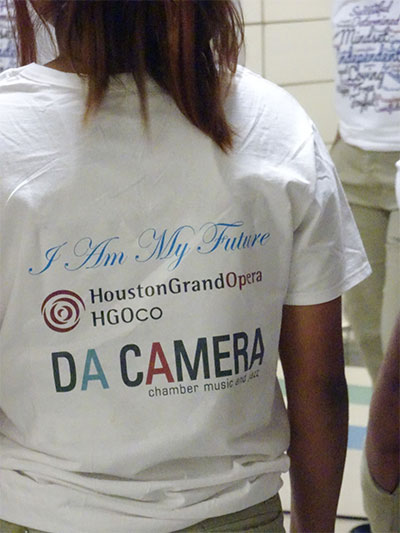 A Harris County Youth Village resident shows off her I Am My Future T-shirt. Photo by Tom Hough, Harris County Juvenile Probation Department.

So much of making music is being able to recognize what you are feeling and expressing it. The teaching artists gave the girls tools to process some of those difficult emotions through sound and physical movement. These girls are no different than any other high school girls. The only things that made the setting distinct from a regular classroom were their uniform jumpsuits and the guard in the room. They laughed and got excited at the same things any normal high school girls would. The extra burdens they bear might have roughened their edges, but they were all capable of warmth, curiosity, and joy. As they worked out the music that reflected their emotional journey, Magallon noticed the girls were more comfortable with soft and sweet music. When they talked about anger and how to express it, the girls drew inward. They couldn’t find a way to expel that energy. She got them to make a face, make a sound, make a movement, giving them examples of how to process the feeling. The emphatic “AH AH” they uttered became the refrain to the freestyle rap that the girls improvised spontaneously. “She had no Dad, some other guy made her glad, but soon the scene became bad AH AH. But she’ll be free, proud, and strong because the guy he was wrong for what he did to her all along AH AH.” It was one of the most electrifying moments in the show.

As much as the teaching artists always tried to pilot the ship toward the positive, there were always going to be things that are not. When the topic of drugs came up, the girls got very animated and wanted to share things that had happened to them and scenarios that were very much reality. The future is abstract. This was real. Do we ignore it? Fox didn’t think it would be right to paint a rose-colored picture of a perfect future without dealing with how they got here. The final product reflected this conversation–conflict will find you, how do you deal with it? Why am I feeling this way? Do I want to stay here? The scene in the song “Peer Pressure” was real. “There were floaties in the pool, everyone seemed pretty cool. There was peer pressure, all of her friends started to use.” When they performed this scene in front of their peers, a freestyle rap around the word “positivity” became an invigorating call and response with the audience. It was empowering to sing the truth, to believe in what they were singing.

As for me, I had tears in my eyes and a smile on my face from the moment they walked into the cafeteria. Wearing the commemorative T-shirts emblazoned with words that will mark their future—“independent, strong, hardworking, loving, joyful,” the girls swayed and danced to the beat of the music, sang and rapped their hearts out. The smiles on their faces, their nervous excitement, the tentative moves becoming more confident as friends encouraged them with a gesture, their peers in the audience responding with shouts and a standing ovation—these were moments that made my heart swell.

Better yet, the girls gave an encore performance immediately after the premiere, with the entire audience singing along on the final chorus “I am my future, this is me.” A second chance to shine? Absolutely!