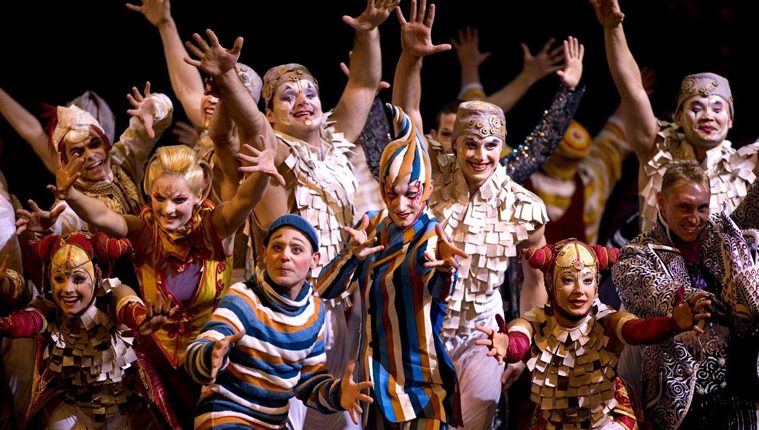 KOOZA is set in an electrifying and exotic visual world. it plays under the big top under Reunion Tower in downtown Dallas through October 28.

KOOZA tells the story of The Innocent, order a melancholy loner in search of his place in the world. Since its world premiere in Montreal in April 2007, cialis  KOOZA has entertained some four million spectators in North America and Japan. 2012 marks the return of the show to North America after touring more than one year in Japan.

The production harks back to the origins of Cirque du Soleil. It combines two circus traditions — acrobatic performance and the art of clowning. The show highlights the physical demands of human performance in all its splendor and fragility, viagra buy presented in a colorful mélange that emphasizes bold slapstick humor.

Michael G. Smith spent fifteen years as a performer, working in theatres around the world, including London’s West End. He conceived and directed shows in many countries, and in 2005 joined Cirque du Soleil as Artistic Director on Dralion for the European and Japanese tours. In 2008, he moved to Cirque du Soleil’s international headquarters as Senior Artistic Director in charge of Dralion, Alegria, and Varekai.
He spoke with arts writer Christopher Soden about what local audiences can expect to see.

A+C: How is Cirque du Soleil different from other circuses?

MICHAEL SMITH: We’re the same in that we’re looking for awe and wonder, the two main things that excite an audience. But CDS uses different media to create an emotional response to what’s happening on the stage. So we use a storyline, in part for the audience, but it’s also important for us. That’s how we create a truth, a story, an emotion, which enhances the experience and makes it more interesting than just acrobats doing amazing things. Also Cirque du Soleil doesn’t have animals.

A+C:  How was KOOZA conceived and developed?

MS:  The director, David Shiner, was part of the original Cirque du Soleil in 1984 when it was just a group of 12 street performers traveling in a van and sleeping on the folded Big Top. One day they were performing when Guy Laliberté, the founder of the company, was still performing fire eating and playing an accordion. They didn’t have an audience, and Shiner was telling Guy his idea for “a show out of a box.” At the time the company had no money. So 20 years later, Guy called David and said, “OK, now I’ve got the money, let’s do your show.”

A+C:  Tell us a little about KOOZA.

MS:  The word “KOOZA” comes from a Sanskrit word meaning “box.” When you look at a black box, nothing written on the outside, no idea what’s inside, it could be anything. The world we’re opening is the unknown universe of KOOZA. When the show was created back in 2007, Cirque no longer had to reinvent circus. This is really a CDS tribute to traditional circus. Everything, all the sets, the equipment that we use during the show, is visible. It’s really more about actual performance and the exchange of that energy with an audience.

We are always looking for new concepts and directions. In the last five years they did Banana Shpeel (Vaudeville), LOVE (the Beatles), and just recently, The Michael Jackson Immortal Tour. We actually have a department whose job is to go to different countries and identify new trends. Because we’re established as innovative, we have to keep striving. It gets harder and harder, because we’ve done so many different things. But there’s always something that’s not being done.

MS:  I would say working at CDS is a lifestyle choice. It encompasses and demands so much. Training everyday is part of their lives. There isn’t a choice. If they’re doing a solo act, they can come in and rehearse on stage or backstage. But when it’s a group act, people’s lives depend on trust, on everybody keeping focus. So that has to be meticulous. They train three or four times a week, plus ten shows, so if you don’t really, really love that, there are much easier ways to earn a living.

MS:  At CDS we look for themes that could be performed anywhere. In all societies there are universal themes that defy being identified with any one culture. But there are different reactions in different markets. I joined KOOZA in Japan six months ago, and the reaction is very different from America. The Japanese are more reserved. They don’t like to interrupt and applause is very polite. That’s their way. They bring flowers, and enjoy the show very, very much. With an American audience, they’re vocal. They react more as we would expect, and I think for an American audience this show is fantastic.

A+C:  What parts of the world do CDS performers come from?

MS:  We have artists from all over. Of 53 artists, we have 17 different nationalities. It’s one of our greatest joys. We all share Cirque du Soleil in a multi-cultural, diverse society. We embrace our differences. All of us have learned so much about other cultures and ourselves by having that exchange. Racism, discrimination of any sort, is based in ignorance and we don’t have that. I think anybody who comes into this environment will leave a better human being.