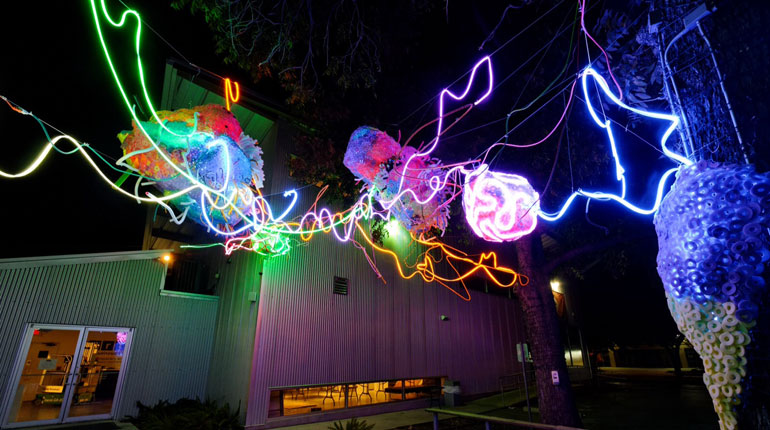 For Adela Andea, Art and Life Are in Constant Flux

When dealing with light, electricity, and solid vs. liquid, I assume it’s easiest (and probably safest) to leave little room for speculation. The lamp is either on or off; the cord is plugged in or its not; the lake is suitable for swimming in, not skating on.

But easy and safe aren’t what Houston artist Adela Andea, who cites the physical strenuousness and expansive scale of installation art as part of the medium’s appeal, is going for. She’d rather harness the brilliance of new-media technologies to explore the nebulous middle ground between two states of being: light and dark, natural and the manmade, organic and inorganic, science and nature, fluid and solid, static and dynamic, perpetual and ephemeral.

Andea’s latest ambitious installation is Mandrágora: Liquescent Light, her second solo exhibitionat Anya Tish Gallery. It marries her interest in liquescence – the tendency of a solid or gas to melt or become liquid – with ideas about the production and emission of both natural and manmade light, all while emphasizing current technologies, industrial design, and consumer culture.

“Through the notion of liquescence, I investigate the dichotomy of the ephemeral and perpetual, the relativity of the ‘in between’ stage of matter that forms our understanding of nature,” she says. “It is a state of transformation that carries the spiritual into science though a fascination with this transition, as seen in various folklores and adopted in popular culture, such as in the movie Final Fantasy.”

Transition is a re-occurring theme not only in Andea’s installations but in her life as well. Born and raised in Romania, she witnessed political and social upheavals that eventually spurred her to immigrate to the U.S., working for several years as a paralegal in Southern California. Deciding that she needed yet another change, she began to search for a livable city with space and affordability. The Texas star shone its own brilliance and drew her attention to Houston.

As an undergraduate student studying painting and sculpture at the University of Houston, color played a major role in helping her find new ways to create artwork. Dissatisfied with the limited brightness of paint, she experimented with other sources of light such as projections and, eventually, full-fledged installations.She went on to earn her MFA in new media at University of North Texas, becoming the first graduate of the program. School officials recognized her pioneering spirit and asked her to be closely involved in the process of forming and developing the department.

Today, Andea works primarily with fabricated light and the devices that produce and present it, the wires and cables that connect it, and the materials that control and conduct it. She doesn’t believe in “pure” light, pointing out that our everyday light sources come equipped with the components that make light possible.

Using energy-conserving materials, Andea has created installations out of fluorescent lights, flex neon, fiber optics and more. Additionally, she incorporates computer-relatedelements such as USB hubs, fans, gear motors, laser printer alignment mirrors, plus Plexiglas and flexible mirrors. The result is a bold, colorful, sensory and physical environment exemplified in previous exhibitions such as The Green™ Cyber Web at Lawndale Art center in 2009, Bioluminescence at Anya Tish in 2010, and Primordial Garden at Art League Houston, her first outdoor public work, which is installed in the sculpture garden through February 22.

Andea’s installations present plenty of challenges. For example, Primordial Garden has a distinct set of demands, including materials that can withstand potential damage from being exposed to various weather (and weather extremes) for an extended period of time. With Mandrágora: Liquescent Light, she faced the complexities of combining light and electronics with water.

“For one work, I used a variety of materials from inside the computer, like closed circuit water cooling system, water pump, Tygon tubing, ultraviolet yellow, LED illuminator, cold cathode fluorescent lights and added new materials such as the LED ultrasonic fogger inside a water tank,” she says. “This work was realized after more than one year of planning, acquiring materials and experimenting with various combinations until the final version was realized.”

“In another work, I am working with longer and heavier lights and the careful planning of all the angles was more challenging than usual,” she says. “Nothing is left to chance. Each strip of light takes me more than two hours to install and the support system twice as long. Each angle counts and I cannot go back where I started as I ‘weave’ myself out. It is that type of work that needs to be finished in one breath; however, due to the scale, it lasts an entire week.”

As she continues to pursue ideas of the “in between,” Andea’s artistic career is transitioning as well.Dennis Nance, exhibitions and programming director at Lawndale Art Center, calls Andea “a Lawndale success story.”

“We’ve seen her go from her internship here to proposing a show on to grad school at UNT and a busy exhibition record since her show at Lawndale, along with gaining representation at Anya Tish Gallery,” Nance says. “Of course, you can’t miss Adela if you’re out and about in Houston. Her trademark pink hair is something that hasn’t changed since I first met her.”