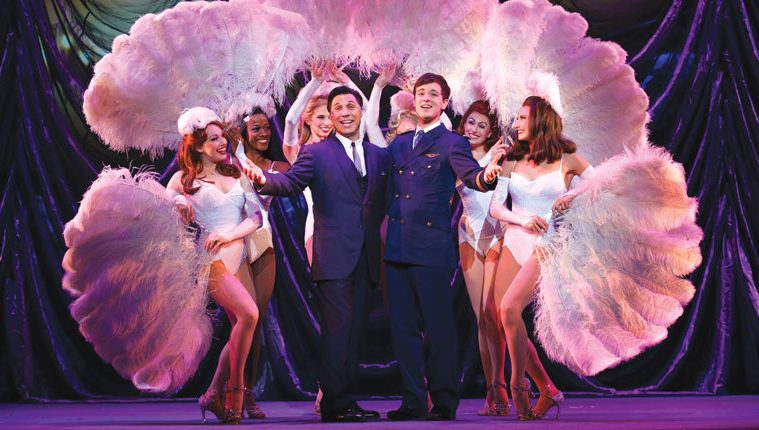 The Con is On

Catch Me If You Can.
Photo by Carol Rosegg.

The first national tour of Catch Me If You Can lands in Fair Park February 12. This swanky new musical about contemporary con man Frank Abagnale, link Jr. is the 2013 season opener for the Dallas Summer Musicals.

Based on the 2002 Steven Spielberg film, hospital the songwriting duo Marc Shaiman and Scott Whitman (famous for Hairspray) made a splash on Broadway in 2011 with Catch Me If You Can. This flashy musical has all the necessary elements – big songs. rousing choreography, and an exciting protagonist.

As a teenager in the early 1960s, Frank Abagnale, Jr. passed himself off as a doctor, a lawyer, and a jet pilot. In hindsight, Pan American World Airways estimated that Abagnale, Jr. flew more than 1 million miles. In the musical, FBI agent Carl Hanratty is hot on his trail, as Frank recklessly hatches one scheme after another.

Stephen Anthony didn’t have to scam his way into the lead role of Catch Me If You Can. In fact it took three auditions and months of waiting before this 2012 Florida State University graduate knew he landed the role.

Anthony visited New York City for a few weeks during his senior year to audition for shows and was called back for Catch Me If You Can. It wasn’t until he returned to the Big Apple with school for a senior showcase that he was called in to read for the role of Frank.

“I was standing in Penn Station headed to my summer job when I received the phone call and I was so excited. That moment was such a whirlwind,” Anthony says. “When I hung up the phone I realized I had no idea which track my train was on and almost missed it.”

Other than his summer internship at Wagon Wheel Theatre, this non-equity tour of Catch Me If You Can is Anthony’s first professional production. The 22-year-old brings a bright-eyed optimism to the role that he believes would’ve been characteristic of Frank.

“This is a guy who believed anything was possible,” Anthony says. “It’s such a crazy idea that you can be whoever you want to be. And he did it all. The adventures he had are pretty amazing.”

As part of his preparation for the role, Anthony read the book Abagnale wrote about his life that inspired both the film and the musical. Abagnale not only chronicles his adventures, but also reflects on the decisions he made. He was caught by the FBI after stealing millions of dollars and sentenced to 12 years in jail. He also began assisting the FBI hunt down bank fraud suspects. In a recent interview with CNN, Abagnale admits he wouldn’t relive it and for the first few years after he ran away from home he cried himself to sleep every night.

“It’s a big, colorful, splashy story,” Anthony says. “But at the end of it, it’s all stripped away to a young boy who just wants his family back.”

When we spoke on the phone, Anthony was almost 100 performances in and said he thinks Abagnale has seen the show five or six times. In spite of having no financial ties to the show, the real con man will fly himself out to see the show and will always shake hands with the cast. At some theaters, he’s even participated in a Q&A with the audience afterward.

“After meeting Abagnale, it becomes a lot more real for me,” Anthony says. “Learning the person he is today was super insightful for me. I really want to make sure I honor the legacy he created.”

The musical does just that with songs that walk through key moments in the life of this young runaway, as he falls in love, makes mistakes and tears through the glamorous 1960s.

“The musical is snappy and fun, but it really sinks in at the end and that’s what makes it so great I think,” Anthony says. “He doesn’t get away with it in the end, but he has a lot of fun trying.”