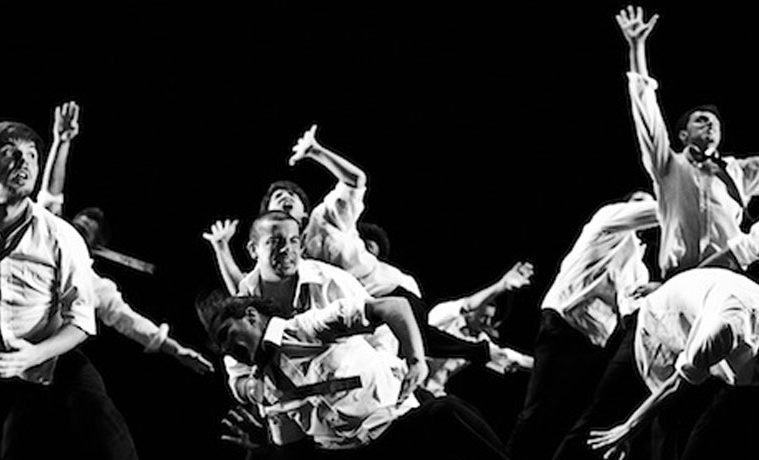 The Darkness of Light

NobleMotion’s Collide: An Evening of Collaborations

The audience for NobleMotion’s Collide experiences a tender moment in the Hobby Center for the Performing Arts’ Zilkha Hall before the show even begins. The curtain is raised and the dancers and Austin-based rock band My Education are visible for all to see. The dancers mark the evening’s work while My Education runs through their set.

As the final moments before the start of the show come to a close, treatment the dancers hug one another, for sale wishing themselves and their fellow company members a good performance. They huddle into their first formation, store some inhaling deeply, others rolling their shoulders to loosen any last-minute nerves. They are clearly pumping themselves up, but they are unafraid because they are one. The dancers of NobleMotion are a family, and their unvarnished moment of support strikes an emotional chord. 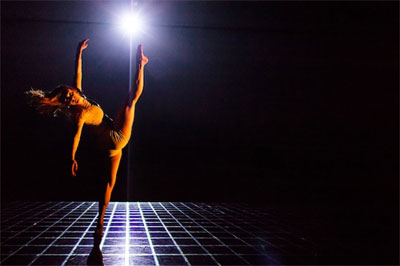 But it’s a chord that is quickly brought to stillness, and the heartfelt punch of that fleeting moment loses its impact early in the program’s first piece, With All Your Might. Dancers fall out of the initial huddle, and the rest do their best to pull the fallen back into the fold. Once stabilized, or as solid as they can get, all eight look upwards in ominous foreshadowing. The stage goes dark, and when the light returns the dancers are seated on the floor where they stay for most of the dance, their limbs reaching out in odd angles and the weight of their bodies melting downwards.

The music by My Education is not so much meditative as it is moody. Moody in a 90s teen angst kind of way. There is a memorable moment when a dancer who has slid off stage climbs back on and attempts to make contact with the other dancers. A stream of shushes comes out of her in desperation as no one registers her appeals to connect. She needs to be uplifted in some way. But structurally it seems that the dance has no rise and fall, no discernible climax, no dénouement for the audience to grasp on to. That final disturbing image of Brittany Thetford cradling Jesus Acosta after pulling him off of a writhing Jennifer Mabus is anything but affirming.

It wasn’t until Photo Box D that I began to be emotionally invested in the work. Lighted by the late Jeremy Choate, Photo Box D sees six dancers propel themselves in front of six panels of fluorescent light to form sinuous, almost alien-like silhouettes that plummet themselves into the background of darkness. These ethereal humanoids cartwheel or leap or snake out of the dark, and then are sucked back in, sometimes by a fellow creature of the dark.

Choate’s lighting design has a heavenly quality, and underscores the dance’s meditation on the fleetingness of life; one moment a friend, spouse, parent, sibling or lover is here, and the next moment they’re gone. The most beautiful image of the program can be found here; all six dancers splat onto the lighting, their right legs quivering, their left arms drop and dangle as if the appendages are now dead weight. They seem to cling to the light with everything that they have.

In a program full of technical wizardry, perhaps the most profound was Sometimes & In-Between, a collaboration between the Nobles and dancers Rachel Hutto, Lindsey McGill, and Brit Wallis. There is no intricate costuming, no elaborate lighting design, no grandiloquent props. There are just three dancers armed with their bodies and their liquid interpretation of Caspian’s Halls of the Summer.

Their movement across the stage was effortless, the weight of their limbs creating enough momentum to generate a seamless stream of turns and volleys into the floor and out of it. McGill was revelatory in particular, with every fiber of her dance gesticulating the joyous spirit of the music. The result of this collaboration is a lovely five minutes of continual movement that affirms the imaginative and healing power of dance, no special effects needed.

Collide closed with Maelstrom, a piece that appeals to anyone’s desire to see more men dance on stage. The NobleMotion men were joined by guest dancers from Hope Stone, Urban Souls, Revolve, Karen Stokes Dance, HIStory, and the Sam Houston State University Dance department for a melee of airborne technique and man-as-animal confrontation. The white shirts and black ties they wear are meant to represent the social constraints that sublimate their instinctive feral nature. They snarl, they growl, and fists are shaken in the air. There’s plenty of sizing up, plenty of posturing, and schoolyard brawling in the form of fun b-boy maneuvers. They dance as men, but the animal is never too far from the surface; there’s a point where they monkey across the stage with primate-like agility.

Maelstrom is an exciting, entertaining piece of dance theater, but as a commentary of contemporary masculinity, it’s a bit flimsy. Watching Maelstrom for the first time, I couldn’t help but think of the groundbreaking work by British cultural critic Mark Simpson, the man who coined the term metrosexual in the mid-90s. According to Simpson, masculinity is a continual performance, an unending audition to be one of the guys. Boys develop into men in fear of being unmanly, so all those alpha, kind-of-the-jungle, testosterone-fueled inclinations toward all things violent become cultural constructs. What is the real man? We’ll never know, but I think Simpson would disagree with the Nobles’ assertion that it’s something akin to the Incredible Hulk unleashed. The audience is free to decide for themselves which thesis to adopt, but I just happen to subscribe to Simpson’s.

David Deveau’s contribution to The Grid created some truly special moments, including a duet that sees a young couple slowly boxed in by the confines of their carefully delineated lives. The paneled backdrop of rippling water was a lovely touch, and gave the scene an intimate, painterly quality. The lighting was beautiful, and I wanted more of it, and less of the darkness – literal and thematic – that shrouded the remained of the dance.