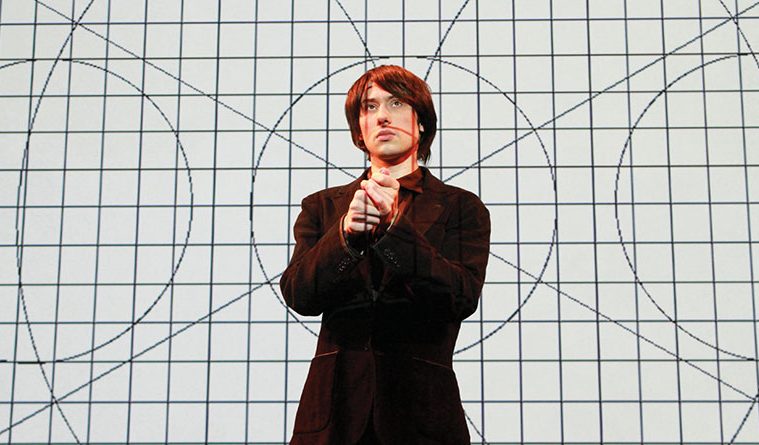 The Excitement of Shift: Joseph Keckler Comes to the Long Center 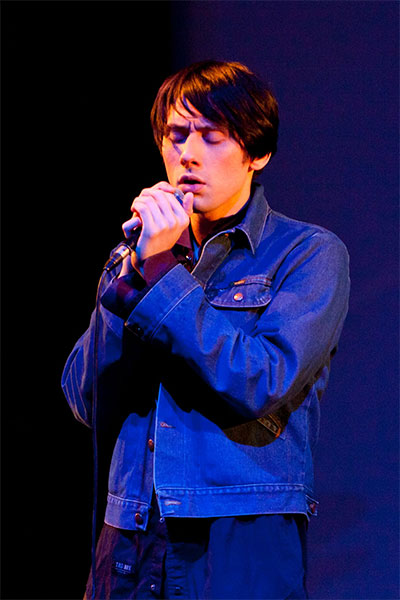 Last April, as the evening weekend revelries began at Fusebox, Austin’s annual cross-disciplinary arts festival, performer Joseph Keckler took the stage at Al Volta’s Midnight Bar. The audience for this not-quite-midnight performance was the ideal mix for the festival’s late night hangout: the international, national and local arts-connoisseur attendees, who came to Fusebox to see innovative dance, theater and music performances, as well as ordinary Austinites on the prowl for good beer, a free show and maybe some bowling. Even this discerning crowd seemed scarcely prepared for the likes of Joseph Keckler and the astonishing performance and voice they encountered.

That Fusebox show might have been the first introduction of the New York-based artist to an Austin audience, but since then Texans are getting better acquainted with the sublime but hard-to-define Keckler. He has made several recent trips here, culminating Jan. 23-24, 2018 in two upcoming performances at the Long Center, co-presented by Fusebox Festival, simply titled An Evening with Joseph Keckler.

Almost a year after Fusebox 2017, I still have trouble describing Keckler’s performance. Monologist, vocalist, opera composer, deadpan-ironic humorist: all of these titles apply to Keckler, but none of them is sufficient in itself. Keckler uses his multi-octave vocal range to delve deep and then high into operatic arias of his own composition. These songs, some in German or Italian, are filled with longing, despair, and tales of hallucinogen-laced chocolate. Once he finishes one song in a show, he might use that glorious voice in service of dynamic storytelling, to mimic the speech and complaints of high-maintenance bosses, clients and even the odd talking parrot.

I caught up with Keckler in the late fall as he embarked on something of a book/demolition performance tour. Along with promoting his new collection of essays and narratives, Dragon at the Edge of a Flat World, Keckler has been back and forth to collaborate with Texas artist friends in performance pieces to mark endings.

For Austin multi-media artist Alyssa Taylor Wendt, Keckler performed and read as one of the final events at Co-Lab Projects’ downtown gallery space slated for demolition. Then, in Houston, he climbed atop conceptual artist Mary Ellen Carroll’s Prototype 180 house to sing a requiem for this project that turned urban policy into an artistic medium. After three songs, Keckler got down but continued to chant a kind of “Om” mantra as Carroll bulldozed the single-family home/architectural performance art into shredded oblivion. 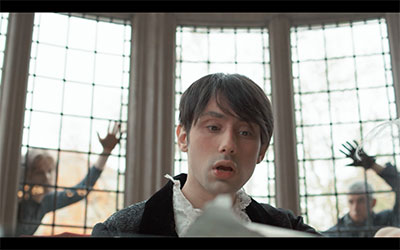 Still from Joseph Keckler’s Strangers from the Internet.
Photo courtesy of the artist.

During my conversation with Keckler, he quite willingly talked about his life, art, operatic training and weird ex-bosses with little prompting, but he resists labels and definitions. He doesn’t consider himself a conceptual artist, though he obviously enjoys collaborating with those that do. If pressed, he’ll agree to the interdisciplinary artist moniker, but only begrudgingly.

“Every time you say something like ‘singer/songwriter,’ it’s going to conjure something totally different. And if I say: ‘oh, yeah, I do these arias, but they’re funny and they’re about my life,’ to me it sounds like something really gimmicky and lame,” he explains, but would admit: “It is important to have language, but I’m just hoping I can perform enough and then people will know what I do.”

“To simplify, basically I’m a singer and a writer. I do those things and an arrangement of stuff that’s in between those things.”

Some of the other but connected “stuff” that Keckler does is to set moments of the everyday, ordinary world into one of the most dramatic mediums of human musical art. Keckler’s work asks us to see and hear that bad shroom trips and finding out a relationship has ended through our lover’s Google maps app is just as deserving of an operatic aria as dying of consumption or chasing magical, cursed jewelry.

Much of the great humor of Keckler’s shows comes from his perception of the melodrama of the mundane in our lives.

“That kind of sarcasm that I have or the perspective of the world where everyone, including myself, is kind of ridiculous is just the way it comes out,” says Keckler of many of his stories some set to music, some spoken with a calm cadence that accepts the bizarre and ordinary as beautiful and annoying in its melodrama. “I think it’s my artistic voice. And then I might use humor as a point of entry that disarms people and then move us into a darker or less funny place. It’s a balance thing.”

“I’m a performer by trade, but I’m more of an observer in reality, off the stage. The people I’m attracted to be around have often been these people who are kind of too much, people who are sort of spilling out of themselves,” he explains.

I mention that I’ve noticed after seeing his show and reading his book that it seems like many of those too-much people are also his ex-employers.

“That’s true,” he admits. “And now I work for myself and I’m too much too. It’s almost like they’re floating around on their own stages. People who cause scenes are the people who I surround myself with.”

Through all the portraits sung and spoken of these scenes-causing divas, Keckler tries to keep his audience alert and wondering as he takes them wandering through his strange world.

“I use language and music and there’s a video element. I guess I am trying to think about those edges and shifts. I like movement and the excitement of shift. I’m not a musical theater person, but there’s that excitement when they go from talking to singing, when it’s just that leap. I like those moments of a dimensional shift, something pleasurable and surprising.”